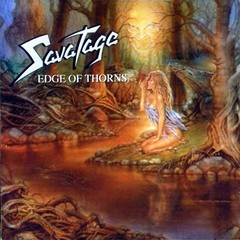 Review:
Savatage is perhaps one of the most underrated bands in heavy metal history, alongside only Anvil. With the band’s 8th release in 1993, Savatage made a deafening statement that they were overlooked, but still very much a titan in the metal scene. From start to finish, Edge Of Thorns was the masterpiece that Savatage fans were waiting to hear. The album marked the debut of lead singer Zak Stevens, following Jon Oliva‘s departure — although he did appear as keyboardist and song-writer on this CD. Criss Oliva‘s guitar abilities were shown to their fullest, but sadly Edge Of Thorns was his final curtain call as he passed away in an automobile accident six months after the release of this album.

The opening title track is the heaviest song ever done in Savatage‘s history. The solo goes on for a solid 45 seconds and the thoughts are that Criss Oliva‘s solo is a combination of Dokken‘s George Lynch and Metallica‘s Kirk Hammett. This track is not only the highlight of the album’s guitar work, but also the pinnacle of Criss Oliva‘s career. The rest of the album was made perfect by new vocalist Zak Stevens.

For anyone new to metal and in search of landmark albums, Edge Of Thorns is a great start. For metal veterans, this CD should also hold high appeal for you. Criss Oliva‘s legacy — love it or hate it — is one worthy of much respect. Today Savatage lives on in the form of Trans-Siberian Orchestra, but the Savatage name itself is still held in high regard among metal fans. The story of Savatage is best told with Edge Of Thorns.