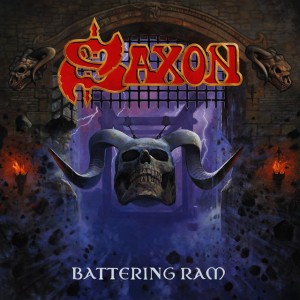 Review:
Saxon have been a band that I have only known by name, and for which I am not familiar with their music. I know they were a major influence on a lot of the bands that I do enjoy, but I never sought out to get my hands on their music. I thought it was about time I got exposed to this English band that started out in 1976 and is now on their 21st studio album, Battering Ram.

The opening track “Battering Ram” kicks off with duelling guitars and some fast drums that will grab any listener’s attention. The song has a great beat for all the headbangers to band their head too! The next track starts off with a narrator warning the listener of “The Devil’s Footprint.” When the music kicks in, it is another song with dueling guitars and great riffs by Paul Quinn and Doug Scarratt. The third song “Queen of Hearts” is one of two tracks that I felt were low key songs on the album. The other track “Kingdom Of The Cross” is a slower song with spoken words during the verse before a harmonizing chorus.

Lead vocalist, Biff Byford, complements the music very well with his powerful voice. He might not have the range that he once had in the late ’70s and in the ’80s, but his voice is very dominant on this album. Bass player, Nibbs Carter, and drummer, Nigel Glockler, hold the rhythm together that makes the listener bang their head and stomp their feet.

This whole album is filled with fantastic guitar riffs and gun blazing solos. For example, “Destroyer,” “Hard and Fast,” and “Stand Your Ground” each all start with a great riff and you are sucked in right away. I could not help but to rock out! They have that BIG guitar sound with two guitars playing together that makes this music so powerful. “Three Sheets To the Wind” ends Battering Ram with what is sure to be a classic drinking song among friends. This is what a rock album is supposed to sound like!