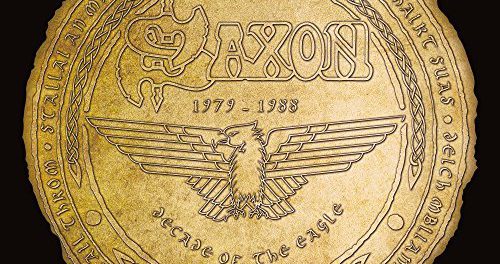 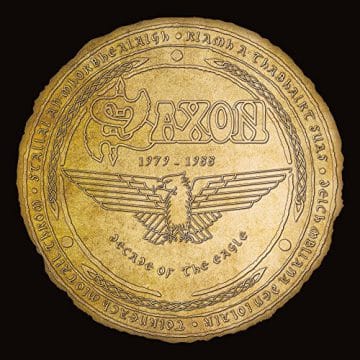 SAXON
DECADE OF THE EAGLE
Released on November 17, 2017 (Union Square)

Review:
It’s fitting that as the year winds down and a new Judas Priest tour was recently announced across North America with direct support by Black Star Rider (formerly the revamped Thin Lizzy) and Saxon; that the aforementioned issue a new ‘hits’ compilation. The new collection is titled The Decade Of The Eagle and it spans the years 1979 to 1988, not exactly a decade but they had to cut things off at some point. As any true Saxon fan would know, it covers the era albums like Wheels Of Steel, Strong Arm Of The Law and Denim And Leather along with records like Destiny and Rock The Nations, which weren’t Saxon at their best. Saxon didn’t break in the United States, likely due to a lack of dashing good looks. They had a number classic records that were most influential and still hold up even to this day. Sure, the production at times lacks the sonic punch of a traditional metal record but you can’t deny the craftsmanship when it came to their songwriting ability.

Union Square has gathered ten tracks from Saxon‘s first decade and drafted a definitive collection to reintroduce the band to the North American audience. The list is quite brilliant, and features hits like “Wheels Of Steel,” “Strong Arm Of The Law,” “Denim And Leather” and “Sailing To America.” Saxon didn’t break through in America in their heyday, but even with that said, they made an impact on American acts as they helped usher The New Wave Of British Heavy Metal which included the likes of Def Leppard, Iron Maiden and Diamond Head, amongst others. The Decade Of The Eagle is also available in a double disc deluxe set, but the single disc will suffice for the casual North American fan to get familiar with their work; heading into their support slot with Judas Priest this spring.