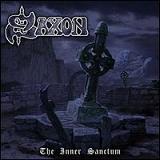 Review:
The boys in Saxon have been around the scene practically since the beginning of metal, and they’re still going strong. Saxon is a band from England that came up through the ranks with Iron Maiden, Def Leppard, and Judas Priest. They have never achieved the level of success of those bands, but were quite popular worldwide during the glory days of metal.

As is the case with most bands who have not achieved over-the-top success, Saxon have continued to work hard and have grown stronger and better over the years. Since metal is still very popular throughout Europe, Saxon regularly play and have headlined Wacken (the giant metal-fest in Germany) and other gigs throughout the year.

From the band’s website: “The past 12 months were undeniably the most successful year in our career to date, so we knew that it would be a good idea to start collecting ideas and write the songs early,” comments vocalist Biff Byford. “All through the last summer, we used the weekdays between the festival weekends to concentrate on working on our albums. We hired rehearsal rooms in Germany, Spain and England, where we ensconced ourselves for three days during the week, before traveling to the next festival. We’d never gone about things this way before, but as you can see it worked.”

Byford has every reason to be satisfied with the result. “The Inner Sanctum is a typical Saxon recording that kicks off with real heavy metal, followed by a couple of rock’n’roll numbers, returning to metal towards the end,” he describes his group’s new offering. Which – between the up-tempo numbers, “Atila The Hun” and “Let Me Feel Your Power” (which unconditionally lives up to its title), the anthemic mid-tempo track “Red Star Falling”, the groove rocker “I’ve Got To Rock (To Stay Alive)” which is reminiscent of the glorious Strong Arm Of The Law era, and ‘Going Nowhere Fast’ – covers the whole range of a typical Saxon masterpiece. The brand-new single “If I Was You” has been available as a download since January 26, 2007. As far as Byford is concerned, The Inner Sanctum is on a par with his band’s great classics; “…a number of tracks have an Eighties feel, but at the same time the production is very modern.”

Standouts for 80’s Sleaze Roxx lovers will unquestionably be the all-out rockers “I’ve Got to Rock” and “Goin’ Nowhere Fast.” The guitars are crunchy and fat and the riffs are giant. Fans of Iron Maiden will love “Let Me Feel Your Power.” Saxon‘s songs are always stories, not simply love songs. They have written about things like the time the band was in a plane trying to get to a gig on time, or when they got pulled over by the police who were hoping to catch an easy drug bust. In this tradition, the track “Red Star Falling” asks the listeners, “Freedom now – The beast is slain – Did you see the Red Star falling?” as an allusion to the fall of communism.

Overall, this album is as heavy as you want in this genre. It still maintains a melodic feel through each of the songs, whether they be metal or straight ahead rock. The only weak spot on the album is the radio mix of the single “If I Was You”, there’s also an album mix of the same song which is far superior. Also included is a bonus DVD that contains seven live songs from their recent “A Night Out With the Boys” small clubs tour, as well as three tracks of interviews with the band.

Saxon is one of the few bands from back in the day who are releasing fresh, hard rocking new CD’s. Free, high-quality audio clips from each of the songs on the new album are available on the front page of their website, just scroll down a bit.