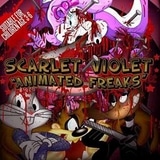 Review:
Continuing the well-appreciated trend of 80s inspired rock and roll comes Scarlet Violet. Unlike the recent offerings from Sweden however, these guys come from Italy. Regardless of geographical origin, Scarlet Violet is offering up some memory-inducing music, conjuring up visions of the Sunset Strip. They sound like they have scrutinized the Hanoi Rocks/L.A. Guns catalogues in an effort to keep this genre alive.

Album opener “Hey You!” attacks the senses with a guttural Marshall-amp assault. Immediately the listener is convinced that this band means business. Vocalist L.A. reminds me of original Iron Maiden singer Paul DiAnno, which scores points in my book. As a matter of fact, the track itself has a heavy influence of Maiden. Apparently L.A. is a vocal chameleon, because he manages to sound like Udo Dirkschneider on the Accept inspired “Back On A Bend”. “Dirty Little Whore” on the other hand is nearly radio-friendly, except for the title and the fact that radio doesn’t like to play true rock and roll anymore.

Scarlet Violet wear their influences on their sleeve, but unlike a multitude of recent Euro-rock, they have taken the time to put their own identity on each track. Though the comparisons to the prior mentioned bands are there, they have found a way to sound fresh. The guitar work from Fylo, in particular, is downright impressive. At this point everything imaginable has been done on guitar, but he finds a way, like the rest of the CD, to sound original.

The one thing that I look for in a band’s music is their rhythm section, unfortunately in this case it is just ‘merely there’. Bassist Fedexx and drummer Joey do their jobs, but don’t stand out in any way. This isn’t important because the vocals, and especially the guitar work, more than make up for that.

My only complaint is that there are a few blatant rip-offs. Yes, I did say Scarlet Violet have their own sound, but in some instances the influence is too obvious. I dare you to tell me that the opening guitar riff to “Cutie Pie” is not Def Leppard‘s “Photograph”. The same goes for “Bad Reputation”; think Dio‘s “Stand Up And Shout”. In all fairness this may simply be a tip of the hat to the band’s that Scarlet Violet are influenced by and does not really take anything away from the music.

That aside, the beauty of Animated Freaks is that there is enough ‘kick’ to the music to appeal to the Judas Priest/Accept fans without losing its intended Hollywood sleaze-rock audience. Not leaning too heavily towards either genre, Animated Freaks is definitely one of the better of the recent 80’s inspired releases I have heard lately. Now, if America would just catch up to what Europe is listening to, we could possibly have a triumphant return of real rock and roll. Scarlet Violet, undoubtedly, would be leading the pack.

Reviewed by Bruce Forrest for Sleaze Roxx, May 2009.