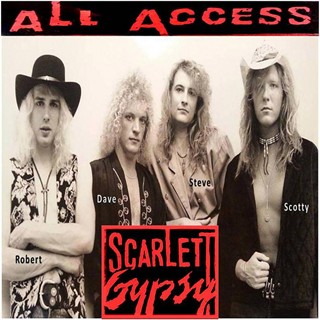 Review:
You could say that York, Pennsylvania’s authentic glam band Scarlett Gypsy is their best kept secret. The band originally formed in 1991, right as grunge was beginning to rear its ugly head, and while most other glam bands broke up Scarlett Gypsy stayed together with their original line-up — making music while the people in northern PA fall in love with them. They have played in front of thousands in their region, but never really made it past that. Now, with the resurgence of ’80s glam, they have decided that it’s time to go out and play — so, they put together their long awaited debut album All Access.

All Access is a raw and hard driving glam rock album that would fit right in the CD rack with bands like Warrant, Firehouse, and Twisted Sister. The gritty sleaze anthems “Lov’n Shuv’n” and “Tuff-E-Nuff” are a breath of fresh air in contrast to today’s whining and guttural screaming singers — they are a treat served with nasty lyrics and grooves. “Is This Love” has a cool driving groove and is a rock and roll anthem that will take you back to the time when wearing leather in 98 degree weather was ‘cool’. The songs on All Access are also complimented by two great power ballads that will make you reach for your lighter — “When You See Me” and “Without Your Love”.

One song that is a huge crowd pleaser is “Black Betty”. You may not know this, but even though they recorded the most popular version, Ram Jam did not write this song — I didn’t know this either. It’s rumored to have originated in the 18th century and is believed to be a song that slaves sang as they were working. Although, I like Scarlett Gypsy‘s version better because it sounds more metal — sorry Ram Jam!

Singer Dave Mathew has a very versatile voice that can do amazing things, listen in particular to the song “Without Your Love”. Guitarist Steve Plonk is easily in the ‘better guitarists’ category when it comes to ’80s hair bands, while Robert Douglas and Scotty Scarlett make up a very solid and nasty rhythm section.

Scarlett Gypsy delivers a great new refreshing sound of old school rock complete with blazing guitar riffs, melodic vocals and infectious hooks — straight to you with the volume cranked up to eleven! So pick up the album — you’ll be cranking it in rotation with all the other hair band greats, and you’ll be itching to see them in concert like I am.