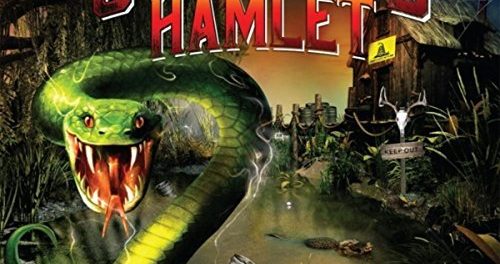 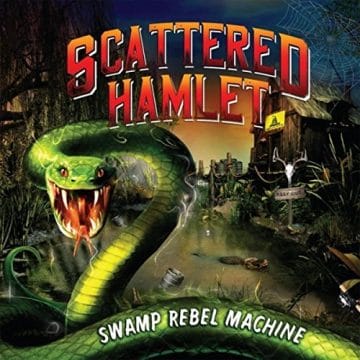 Review:
I will go on record as being very ashamed in the fact that I did not know of Scattered Hamlet prior to getting the ping to review their upcoming second full-length release entitled Swamp Rebel Machine. Well now before the flogging begins, thankfully there is a ton of new music coming out that tickles my fancy and I give it a go to hear it all. That being said, be damned if this band tried to slip under the radar and be damned again if they are not only worthy of everyone’s notice and appreciation, but they are racing up my personal charts to firmly place themselves as a favorite band, in continuous and heavy rotation. Also I will predict that the new album Swamp Rebel Machine will easily rank in 2016’s top five releases, without a doubt. Please quote me.

For those not familiar and willing to take a poke on some kick ass and self proclaimed “honky tonk metal,” then take the musical blinders off and give Scattered Hamlet a go. The doors are welded shut on my ’69 ‘Cuda but the windows are down and the Alpine goes to 11 so shimmy on in and let’s tear this mutha up.

Instantly, the correlation to other “southern fried” metal acts will be formed… I hear gobs of influences both yesterday (Skynard, Waylon, Haggard, 38 Special, Blackfoot, Molly Hatchet, The Charlie Daniels Band and Hank 1, 2 and 3) and today (THC, Rebel To Rebel, Hell Yeah, Cowboy era Pantera and Kid Rock), but for me Scattered Hamlet drop the modern metal moniker in favor of the old school sleaze coated influences of ’80s acts like Junkyard, Tora Tora, Sweet FA, Every Mothers Nightmare, Faster Pussycat, Spread Eagle and Tesla. Adam Joad is a great in-canter of Junkyard‘s David Roach (a lot), the non screamo version of Phil Anselmo, Taime Down and a heaping helping of Robert James Ritchie. He also blows a badass mouth harp. Adam Newell is as talented a guitar player as anyone ever was. This kid swings back and forth from full blown shredding to finger pickin’ to rhythm and blues with the ease and efficiency the most seasoned and proficient session players. The rhythm section of drummer Jake Delling Le Bas and bassist Richard Erwin is top shelf, making their mark all the way and as tight as all get out.

As the opener “Battle Hymn” sets the stage for what is to follow, the track simply slays. Slathered in sleaze and hard rock pedigree, this is an anthem for the working class that pummels the message “Don’t Fuck With Me” into your psyche until you are chanting the mantra right into track two’s hard rocking “Whip-Poor Will.” This is where the notion is confirmed that Scattered Hamlet and company mean business and if you aren’t strapped in, you’re gonna get thrown, pure energy, attitude and damn fine musicianship heated to a frenzy and served hot. “Stonewall Jackson” is a tasty uptempo rocker with a Guns N’ Roses “Welcome To The Jungle” inspired bridge that unless you’re tone deaf, you can’t miss. “Four Barrel Mojo” and “White Trash” are a pair of sleaze rock/Junkyard flavored anthems that will have you singing and swinging along before the end of the first chorus and then slapping on repeat cause they are just too damn infectious. “Swamp Rebel Machine” is as swampy, sticky and hot as the title implies. This one grooves a bit more than the others as the tempo cocks down a notch, but the quality remains in spades. “Green Bastard” incorporates a nifty punky sleaze rockabilly drum and then a killer funky guitar bridge that is placed perfectly and sets up a tasty guitar solo that follows.

“Outlaw Breed” is the third or fourth song that is slathered in cowbell, which is worthy of praise as Bruce Dickinson demands more of it, no doubt and the song is yet another excellent example of the hillbilly pride anthem the boys are preaching and singing to throughout the disc. When I listen to “Outlaw Breed,” I can’t help thinking this is a Kid Rock tune and he is guest singing on the disc. Easy to see and should happen as the pairing would be amazing. “Rimfire” goes right back into Junkyard mode ala Blooze with a killer riff and harmonica guitar duel of epic proportions. The hand claps are a nice touch as is the Flirtin’ With Disaster guitar progression at the 3:20 mark. “Buckshot” is where Adam Joad sounds the most like Anselmo and this hard rocker pays a massive nod during the verse to Thorogood‘s “One Bourbon, One Scotch, One Beer” of course on meth and horse tranq’s and Newell‘s clean tone solo is brassy and played to perfection. Rounding off this no song skipping disc is the Cory Clark/Warrior Soul groove trip rocker “The Lesson” that preaches to the minions about good ole’ country music and the pride the founding fathers instilled in us.

Summing up, Scattered Hamlet are a killer band and they deserve your attention. The musicianship is too good and the playing is great. The songwriting, attitude and content grabs you, makes you think, laugh, scream, shout and becomes a part of you. If you don’t feel , if you are not moved after listening to “Swamp Rebel Machine” by Scattered Hamlet, then you must be dead. Boys, if you’re listening, I am in need of three things as of writing this: (1) to obtain any and everything that the band has released musically and of course emblazoned with logo or credo; (2) a west coast show (Portland please); and, (3) and this is greedy, but the follow-up as I am a fan and can’t wait for more. That said and if none of my wishes come to fruition, I have been sufficiently warned and I quote “Grandma taught me nothing’s guaranteed except the hillbilly pride and the outlaw breed”.

The second single off of Scattered Hamlet’s sophomore album “Swamp Rebel Machine” out now! Pick up a copy at iTunes or a CD at http://shop.scatteredhamlet.co…

Title track and first single off of Scattered Hamlet’s sophomore album “Swamp Rebel Machine” out now! Pick up a copy on iTunes or a CD at http://shop.scatter…