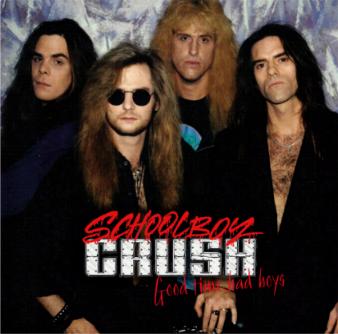 Review:
With a name like Schoolboy Crush one would expect to hear a typical sickeningly sweet pop-metal band, but that’s not the case here at all. Schoolboy Crush is a rock band – a rock band that seems to have an identity crisis as this collection of recordings spanning from 1991 to 1993 is all over the map.

Do these guys want to be BulletBoys clones (“Bad Bitch”), Journey balladeers (I keep picturing Steve Perry bawling during “Without You”), southern rock patriots (“I Pledge My Allegiance”) or thrash kings (“Reap The Whirlwind”)? Personally I wish things were more consistent and more focused, but Schoolboy Crush did arrive on the scene when popular music was getting a massive make-over and perhaps they were trying to see where they would fit in best.

Another problem here is stated right in the liner notes – “this is the original mix”. That in itself isn’t such a bad thing, except when the original mix on “Such A Waste” and “Calling Out” is so atrocious. The vocals are so low in the mix that one has to wonder if they were recorded in a Campbell’s soup can. Luckily things get better after that rocky start.

My favorite song here is the bonus track “To Your Knees”, a cool rocker with a chugging guitar line. It originally appeared on a 1993 Foundation’s Forum sampler and as far as I can tell is the last material Schoolboy Crush ever released. It looks like they disappeared as soon as they reached their peak, but upstart label Suncity Records has uncovered the band for anyone that is interested.