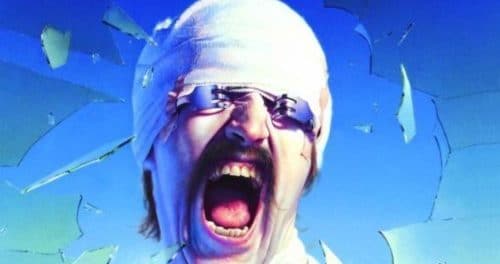 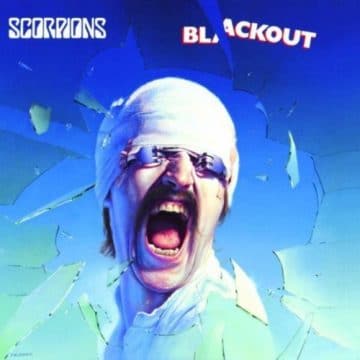 “Blackout” — Schenker opens the album with guitar riff number one and boom, here comes the rest of the boys and it takes all of five seconds to realize that Jabs is gonna smoke some serious guitar leads on this record. Jabs has always been underrated in my book. Why, I have no idea. I mean he’s got all the flash in the pan guitar hero moves and licks, but there’s something about his playing where he takes it to another level. So yeah, kudos to you Mr. Jabs! “Blackout” though is a great opener and hey man, if you’re any kind of rocker who has this album, shall we all on the count of three, sing together… “Blackout… I really had a Blackout… Blackout… I really had a Blackout… Blackout…” This song kicks down the walls and what a start! And full props to the wail of the vocals and smash of glass at the end of the song!

“Can’t Live Without You” — Scorps delve right into “Can’t Live Without You.” Klaus counts it in with a 1-2-3-4! Quick snappy guitar jabs (ha) deliver this tune. The pre-chorus is awesome and the well, the chorus, is jammed with of course “Can’t Live … Can’t Live Without Uuuuuuuu!” Great solo and the Scorps are winning me over man and by that, I mean I had the ad for Blackout hanging in my locker at my old high school (Lakeview High circa 1982).

“No One Like You” — The guitars blast out into this tune but it’s not power metal, it’s gassssssssp… a power ballad. Alright, let’s cut to the chase. The Scorps deliver a slower type tune the way it should be done. Sure, it has a slower pace to it but it has balls. The guitars courtesy of the Schenker/Jabs law firm of Klaus Meine and Associates keep the song from wussing out! Super deadly chorus! Super duper guitar solo and a total shout out to the vid that was filmed at Alcatraz! Love the part in it when Rudy smashes the guitar into smithereens and he has that crazy contraction on his head just like the pic on the front cover. Crazy fuckin’ Germans but man, they rock!

“You Give Me All I Need” — Scorps keep the train on the tracks and push this pace a little faster than “No One Like You.” Some acoustic guitar is on this track and the chorus is a winner. Of note, Rudy would lay down the solos of the slower paced tunes like this one while Matthias would rip out the quicker tunes. Go listen to this album and hear for yourself.

“Now” — Klaus leads the charge to the end of side one. Tons of Jabs laying waste to his fretboard while Herman Ze German and Francis lay down the bottom end. This is an ass kicker track! “Nnnnnnnn… Now!” Nuff said!

“Dynamite” — Blitzkrieg… boom, this song is fired out of the cannon of super speed and there are tons of smashing drums and guitars colliding before everything grinds to a halt with just the drums pounding and Klaus lays down those great lyrics. It’s the ’80s time to party bitches… “Kick your ass to heaven with rock n roll tonight / I’ll make this night a special one / Make you feel alright / Shoot my heat into your body, give ya all my size / I’m gonna beat the beat tonight / It’s time to break the ice! ….DYNAMIIIIIIIITE!”

“Arizona” — Why man was this not a single? It oooozes cool with a real simple groove that has hooks all over the map! The guitars are so damn catchy. We all know the deal. Klaus is chasing some chick from Arizona! T-bone has spent a many a yesteryear in Arizona back in the day. I will have to grill him on the deal here. Anyways, this song is a great rock track. So it will come to no surprise when I say… GEM!

“China White” — Holy crap! We’re into some serious partying now with the Scorps. To be honest, I would probably be hiding when the ahem, white stuff is out, but still this is an exact opposite feel good happy tune of the previous track “Arizona.” Gone is T-bone lazing in the Arizona sun with the beauties around pool side. In its place is “China White” with its Sabbath sounding cross mixed with the Scorps sound. In its place, Deke is thrashing around in the dumpster looking for booze out back in the posh Arizona hotel that T-bone is staying at!

“When The Smoke Is Going Down” — So we go from playing at a 100 mph (“Dynamite”) to chilling poolside (“Arizona”) to seeing it snow (“China White”) in Arizona before finally capping it off with the protocol Scorps‘ end of album power ballad. This is a good track. Schenker takes the lead guitar on the slower tunes and plays a real good lead. Wow man! For my first Scorps purchase, they made a classic album. No Filler whatsover here folks.

In conclusion, it’s even more remarkable that “Blackout” was even made. Word on the street back in 1982 was that Klaus Meine had lost his voice and that the band brought in Don Dokken to do the demos! Don and his Dokken posse were in Germany at the time recording their debut album Breaking The Chains. Imagine that? But fortunately everything worked out in spades and the Scorps delivered and executed a large piece of German hard rock that made myself and Muc stand up and take notice.

Girl, it’s been a long time that we’ve been apartMuch too long for a man who needs loveI miss you since I’ve been awayBabe, it wasn’t easy to leave you alone…

Subscribe now: http://goo.gl/Jjr53KArizona was one of the single outtakes from the Blackout album, enjoy this interesting music video, especially the choreog…