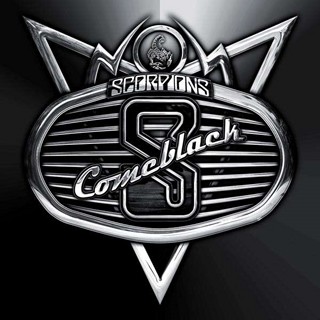 Review:
Like many long-time heavy metal fans, I was saddened when the Scorpions announced that their current (seemingly endless) world tour would be their swan song — a final farewell by one of the genre’s most influential and consistent bands. The sadness dampened when the German legend’s final album Sting In The Tail was released, because it seemed like a fitting way for the band to make their exit — on top once again.

This brings us to Comeblack, an album that proclaims to be an encore for the die-hard fans. While that may in fact be true, I doubt the hard-core fans are going to be as excited about this release as the band is. The first half of Comeblack consists of re-recorded versions of some of the band’s most popular songs, usually staying fairly true to the originals. “The Zoo” is probably the biggest disappointment here because it has lost some of its signature bite and comes across as too polished, or maybe because it has always been a personal favorite. But in all honesty, only the loyal die-hards are going to notice any difference with these renditions, and will likely prefer the versions they’ve grown up with — which begs the question, what’s the point? An album such as this would have worked better if the band dug deep into their vast catalogue and reworked some long-forgotten and lesser know gems, and the Scorpions have a vast amount of material they could have chose from.

That’s the good news… the bad news is that the second half of Comeblack is a collection of cover tunes. And kicking it all off is the horrific “Tainted Love” — I don’t care how much the Scorpions try to beef up and ‘metalize’ the track, a shit song will always be a shit song. From there I just kind of lost interest — sure the Scorpions do all these tracks justice, but do we really need to hear them cover The Beatles and The Rolling Stones? I feel the Scorpions are above such bar-band tactics — and for the record, Skew Siskin did a far more energetic version of “All Day And All Of the Night” back in the early ’90s.

If this CD was for the die-hard fans as the band claims, a far better idea would have been a live album/DVD chronicling the final tour or a release that raided the closet — I have a feeling both will be on their way eventually. Or maybe even re-recordings that involved every member who has graced the Scorpions line-up? I think the true fans would have appreciated something like that much more than hearing their idols covering decade old songs that have little in common with the Scorpions signature sound.

I always take retirement notices in the music business with a grain of salt, but I hope the Scorpions do in fact return because their legacy doesn’t deserve to end on such a half-hearted note. While I don’t hate this CD (although I do find it pointless), for me Comeblack is the equivalent of a great boxer coming out of retirement only to get his brains bashed in and suffering permanent damage — the Scorpions don’t deserve such a fate.