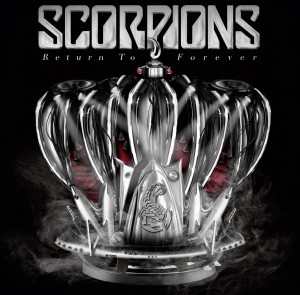 Review:
The Scorpions have the rather unimportant distinction of being one of five bands that have reached number one in my own personal ranking of which is my favorite band. You see, back when I was a young lad in high school, I used to love to compile “top 10 lists” of my favorite bands and I had one friend who was as dedicated as I was in that regard. We usually exchanged lists to pass time during our classes just about every school day — at least for the first few years — and although the bands would often change spots or rankings on a daily basis, the coveted number one spot rarely changed for either of us. These days, it would be really difficult for me to name my “favorite” band but back then, the Scorpions were one of four bands to have reached my number one slot during my high school years. That being said, the Scorpions‘ run at my number one spot was the shortest of those four bands but nevertheless, they got to number one on the strength of World Wide Live.

Although I continued to really like the Scorpions for a number of years afterwards, I started losing interest with their 1993 release Face The Heat. In fact, I did not listen to any of the band’s subsequent studio albums until my younger brother bought me the German rockers’ 2007 release Humanity: Hour I while insisting that I would really like it. That turned out to be pretty accurate as I enjoyed that album although it did seem a little poppier than earlier efforts. Luckily, the Scorpions‘ next album Sting In The Tail was a return to form for them and I was now looking forward to the band’s next studio release (I do not count the rather dull covers album Comeblack) once they confirmed that they had changed their mind about hanging it up after their farewell tour. Oddly, Return To Forever was released back in February or March of this year but the Scorpions have now re-released the album with an additional seven tracks for a whopping total of 19 songs.

When I first heard Return To Forever in early 2015, I thought that the songs were catchy but a little too poppy / commercial for my taste. I did not revisit the album until earlier this week when upon seeing that the Scorpions would be playing a lot of new songs during their tour stop in Toronto, I decided to get familiar with their new material. As it turns out, I really enjoy most of the songs on the condensed version of Return To Forever (which only includes 12 tracks) but the bonus seven tracks that make up the re-release of the album mostly feel like “leftover” ones. The first seven songs on Return To Forever are really good, catchy and easy sing along with Klaus Meine material. My favourites are “Rock My Car” and “Rock ‘N’ Roll Band” which are two of the most rocking tunes offered on Return To Forever. I even like the first ballad “House Of Cards.” Unfortunately, the album ends rather weekly with two additional ballads — “Eye Of The Storm” and “Gypsy Life” — both of which pale in comparison to “House Of Cards.” The rather dismal “Rollin’ Home” with its very boring chorus should have never made it onto the album.

Filling up an album with 12 solid tracks is pretty tough to do and nearly impossible when there are 19 songs on a record. Not surprisingly, the seven additional tracks on the re-release of Return To Forever are notably weaker than the first 12 tracks included with the original release of the record. Given that a lot of the Scorpions‘ signature songs are ballads, it is also not surprising that there are two more ballads (dull ones) — “The World We Used To Know” and “Who We Are” — among the seven additional tracks bringing the total of ballads to a whopping five out of 19 songs. The rest of the seven additional tracks are hit and miss, sometimes borderline awful such as “When The Truth Is A Lie” (which hurts me inside when I have to hear that chorus) while sometimes quite good such as the last three tracks including “Delirious” which boasts a cool guitar riff and some good melodies.

There is a reason why the Scorpions first released Return To Forever as a 12 song album. The reason is downright simple. The Scorpions did not have many more good songs to offer. Re-releasing Return To Forever with seven additional hit or miss tracks only serves to tarnish the record. It’s also a bit of a slap in the face for all the people who first bought Return To Forever when it only had 12 tracks. Why do fans have to purchase those 12 songs again six months later to access those seven new tracks? What the Scorpions should have done is release a seven song EP but Meine and company likely realized that those seven songs were not strong enough for a stand alone release. Accordingly, what the Scorpions should have done is pick and only release the best 10 tracks out of the 19, which could have arguably amounted to a killer album.