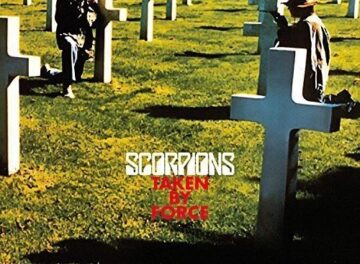 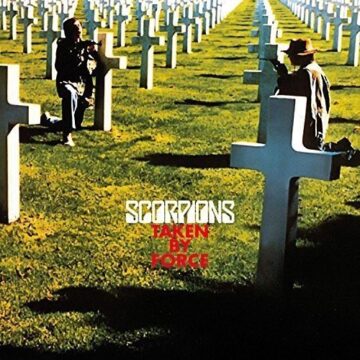 Review:
Taken By Force may not be the first album that comes to mind when many people think of the Scorpions, but it is one of the most unique and important releases in their catalog. It is the fifth studio release by the Scorpions, the last to feature lead guitarist Uli Jon Roth, the first with drummer Herman Rarebell, the last with RCA Records, and the first to reach the Billboard Top 200.

The band was divided into two songwriting camps with singer Klaus Meine and rhythm guitarist Rudolf Schenker in one, and Roth in the other. The album credits clearly evidence the division with Roth writing three songs and Meine and Schenker writing the other five (one of those with Rarebell who either naturally meshed better with Meine and Schenker and/or knew the internal politics well enough to know a split was imminent and which side he wanted to be on). Roth was musically alienated. Joining the Scorpions after their first release, Roth wrote songs for the second, third, and fourth albums. If you review the songwriting credits on those previous releases, you will see that he initially collaborated with the other members but then increasingly wrote alone until we see the complete break on Taken By Force. Roth played some live shows in support of the album, but formally announced his departure to the band not long after recording Taken By Force. They probably knew it was the end well before the record was finished.

Though “musical differences” can be diplomatic code for a number of reasons members depart, that seems not to be the case here. In the liner notes for the deluxe edition, Meine recalls that “Musically, we were drifting apart. In the past, the diversity in taste and styles had been a blessing for us, but now it was becoming increasingly difficult to find a balance that satisfied everyone.” Roth explains that “I’ve never had much interest in hard rock and heavy metal. As a guitar player, I’m influenced by Jimi Hendrix.” Roth knew that Schenker and Meine wanted to take the band in a different musical direction. Roth remembers that “Back then, I was composing pieces which were later put on my first Electric Sun album. Those songs would never have fitted into the musical concept that Rudolf Schenker and Klaus Meine wanted.”

With this in mind, let’s separate and compare the Meine/Schenker/Rarebell tracks to the Roth ones. That’s easier to do than one might think. If we look at the sequencing of the album, the Roth compositions are tracks three, five, and six. If the record flipped the order of tracks three and four, Roth would have his own unbroken three-song section in the middle of Taken By Force.

Let’s consider the non-Roth tracks first. “Steamrock Fever” is a fun, fast, riffing opener with a classic, soaring Scorpions chorus. “We’ll Burn The Sky” begins with a slow and thoughtful guitar line and mournful vocals from Meine. Immediate comparisons might be to “Still Loving You.” After the verse, the song picks up the pace and heaviness before returning to the softer verses. “The Riot of Your Time” starts with a mix of acoustic and electric guitar before settling on electric and then moving back to acoustic. It’s a dramatic track with elements of progressive. The trampling “He’s A Woman, She’s A Man” is another speedy rocker. Rarebell wrote the lyrics. “Born To Touch Your Feelings” is an acoustic ballad that breaks out into a strident chorus. I could do without the strange, overlapping voices that finish the track. The sparse acoustic line would have sufficed. “Steamrock Fever” is the highlight.

Moving to the Roth portion, “I’ve Got To Be Free” immediately shows Roth’s Hendrix influence. In fact, “I’ve Got To Be Free” could be a Hendrix tune, albeit a lesser one. These aren’t Meine’s best vocals. At certain points, he sounds a little scratchy. Other times, he just sticks to his mid-range and doesn’t give us that clean, soaring voice he’s so famous for. Not bad at all, but “I’ve Got To Be Free” highlights that the Scorpions were a different band when playing the Uli tracks (though given the division and tension in the band, it’s remarkable that Taken By Force sounds so cohesive). One also wonders if the song’s title and lyrics are a clear and pointed message to Meine and Schenker. The narrator says, “You wanna be a superstar / Don’t give a damn how to get that far,” “You’re in love with success,” and “Your god is money.” The final words are “Let me go.” Either I’m reading into this too far as Roth gave a satisfactory explanation as to what the song is actually about, the rest of the Scorpions totally missed the point, or Meine was a very good sport to sing on it.  Not bad, but also not a very Scorpions-sounding track.

“The Sails of Charon” is a cutting and fierce mid-tempo track with a solid groove. Roth’s lead guitar work is blistering. There are a few schmaltzy late ’70s studio sound effects that randomly appear that don’t add anything to the track and sound dated now.“Your Light” has shades of funk and doesn’t sound like the ’80s hard rock version of the Scorpions that we hear on classic rock radio. Nonetheless, check out the guitar work beginning about 2:20 and ending about 2:50 in which either Schenker or Roth — I think Roth — channels his inner Hendrix to the fullest and gives us the best 30 seconds of the entire album. Transcendent.

If you’re unfamiliar with this era of the Scorpions, you will still probably enjoy Taken By Force, but it may take multiple listens to get into it (it did for me). Two live shows from Japan were taped on Roth’s final 1978 tour with the Scorpions. Compiled from those two performances, Tokyo Tapes is a live overview of the first phase of the Scorpions and well worth tracking down if you have an interest in Roth-era Scorpions. For more casual fans, the sixth studio album Lovedrive (1979) is where the Scorpions begin and World Wide Live (1985) is their definitive live document. Taken By Force is the last studio snapshot of a band completing one path and poised to follow another, this time to global success.