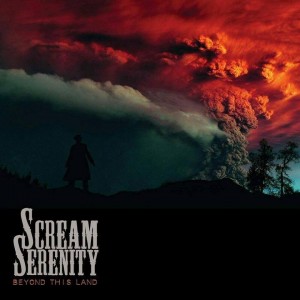 SCREAM SERENITY
BEYOND THIS LAND
Released on November 30, 2015 (Scream Serenity)

Review:
It’s always fun putting on an album when you have never heard any songs from the group before nor even heard of the band before. This was the case with Scream Serenity and their four song EP Beyond This Land. I was pleasantly surprised with what the English rockers had to offer.

The opening track “Legacy” is a power metal monster mixed in with some more modern alternative influences and some excellent vocal harmonies, which makes it easily the best track on the album. The only portion of the song that I am not fond of is the last slowed down verse portion prior to the guitar solo which does not seem to fit in with the rest of the track. The next track “Twisted” is another good song that is in the same vein as “Legacy” except with less power metal emphasis and one killer guitar solo. The singing on “Twisted” and especially on the EP closer “Beyond This Land” actually reminds me a lot of the vocal delivery from Canadian rockers Fallen Heirs‘ singer Tim Shaw which I really like. The one track that I don’t really like is “End Of Us All” which is a little too much astray from the type of music that I listen to with its alternative slower musical style.

All four tracks on Beyond This Land clock in at over five minutes each and take you on a bit of a journey each time with their different arrangements. Scream Serenity play a brand of more serious hard rock. It is not “good time” rock by any means but the band offers some strong songs built on solid musicianship and excellent vocal harmonies. I was wondering why I was not able to give any examples of bands other than Fallen Heirs that Scream Serenity sound like as a comparison but upon checking out the latter band’s Facebook bio section, I realized why. I am simply not familiar enough with the more alternative rock bands that Scream Serenity identifies with such as AlterBridge (I bought their last album due to Myles Kennedy fronting the band but could not get into it), Stone Sour, Shinedown (I did see this band open for KISS back in 2013) and Theory Of A Deadman.

Whether or not Scream Serenity would be classified as an alternative rock band, the group’s Beyond This Land is an enjoyable and solid EP that is definitely worth checking out and one that has me interested in keeping abreast on future developments with these English rockers. If you’re interested in hearing or picking up the EP, I suggest checking out Scream Serenity‘s website.

‘Beyond This Land’ The Waterfront Norwich

Clench those fists and raise them up, here is our EP titled track Beyond This Land performed at the brilliant Waterfront main stage Norwich.