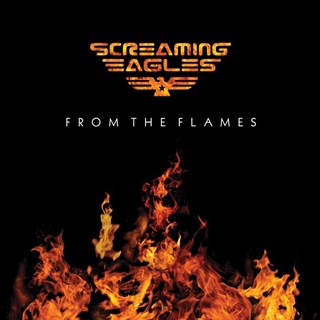 SCREAMING EAGLES
FROM THE FLAMES
Released on December 18, 2012 (Screaming Eagles)

Review:
Who the hell are the Screaming Eagles and why didn’t anyone previously contact me about them? The reason I ask is because their debut album From The Flames is absolutely killer, and likely would have made it onto my top 10 of 2012.

Apparently the Screaming Eagles are a new band from Northern Ireland that some people are comparing them to AC/DC, but their music is way too sophisticated for such a generalization. Sure they have a similar energy, but think more along the lines of Buckcherry sleaze, Little Caesar blues and Bad Company during their ’70s heyday. That recipe looks good on paper but it sounds even better spread across ten scorching hard rock tracks.

I’m not sure what impresses me more about Screaming Eagles — the picture perfect vocal delivery of Chris Fry or the fretboard skills of Adrian McAleenan. Both completely shine on From The Flames (the rhythm section isn’t too shabby either) and after a few listens vaulted towards the top of the ‘unsung heroes of hard rock’ list. It was Fry‘s bluesy pipes that originally caught my attention as he sings each song with an abundance of passion, but as I dug deeper into the album McAleenan‘s drool-worthy riffs, which he peppers throughout From The Flames, almost took center stage — so let’s be fair and call it a draw.

I’m not even going to bother going through the individual songs on From The Ashes as there isn’t a dud in the entire bunch — so why type up a couple more paragraphs that will just slow you down from checking out this awesome new group? Lots of newer bands are able to capture such consistency over the length of an EP, but to be so perfect over ten tracks is another story entirely. The Answer may be the current kingpins when it comes to Irish hard rock, but I suggest they don’t look in their rear view mirrors because they’ve already been overtaken by a flock of Screaming Eagles.