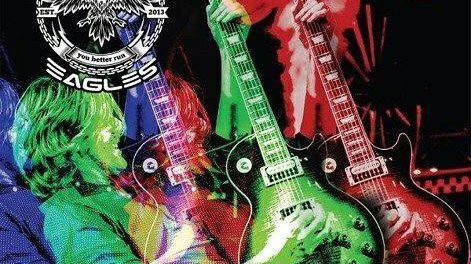 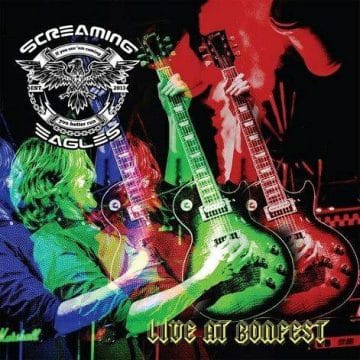 Review:
Out of sight, out of mind. In this world of social media, it’s easier to disappear than it is to stay current and relevant over a long period of time. The Screaming Eagles are a band that I was quite excited about back in mid-2015 when the Northern Irish rockers released their sophomore album Stand Up And Be Counted. I ended up interviewing the band shortly thereafter but it seems that whatever momentum that should have been generated with such a great release was lost as I hardly heard anything from the group in the last couple of years. At one point in August 2016, Sleaze Roxx reported that the Screaming Eagles were going to be recording their third studio album in early 2017 but I hardly heard anything from the group until all of a sudden, a live album titled Live At Bonfest was set for release at the end of March 2018.

Remembering how much I enjoyed both of the Screaming Eagles‘ first two studio albums, I ordered Live At Bonfest pretty much right away. It took a little while to get my copy and when I first listened to it, I must confess that I was slightly disappointed given that out of a nine song set, there were two covers and really three if you count the snippet of AC/DC‘s “It’s A Long Way To The Top If You Wanna Rock N’ Roll” at the end of the song “Blood.” Granted, the Screaming Eagles‘ live album Live At Bonfest was recorded at Bonfest (in Scotland), which is dubbed the International Bon Scott Rock Festival and is obviously a tribute to the legendary deceased singer. Accordingly, one should not be surprised to have a couple of Bon Scott era AC/DC covers thrown in for any band’s set at such a festival. Not surprisingly, the Screaming Eagles have two with the snippet of the aforementioned track and their cover of “Hell Ain’t A Bad Place To Be.” It’s not that I don’t like the Screaming Eagles‘ covers on Live At Bonfest but more that I would have wanted to hear more of the Northern Irish rockers’ original tunes on a live release and especially since they played such a short set with only nine songs.

Given that Bonfest is a tribute to Bon Scott, I could have lived with the two AC/DC covers but the one that really irked me early on and still does, but to a lesser extent now, is the cover of The Doors‘ “Roadhouse Blues.” It’s a great song and the Screaming Eagles do a decent version of it but the band has more than enough great songs not to have to rely on so many covers in a nine song set. Listening to Live At Bonfest, I realized that I kind of forgot how good the Screaming Eagles‘ material is. There is definitely not one weak track on Live At Bonfest. Surprisingly, the Screaming Eagles played five songs from their debut album From The Flames and only two from their sophomore effort Stand Up And Be Counted. Whatever the case, the band delivers a rocking set with its brand of straight up AC/DC meets bluesy rock n’ roll. It’s a bit of a shame that lead vocalist Chris Fry states towards the end of the band’s set that the crowd is kind of quiet because it shatters what you might have thought of how the concert was going up to that point. At the very least, any images in your mind of the crowd going absolutely nuts during the Screaming Eagles‘ set are evaporated. I wish that that comment from Fry had been edited off of Live At Bonfest.

In any case, Live At Bonfest is a fun live record. My favorite tracks are “Screaming Eagles”, the riffy “All The Way” and the group’s signature and should have been a hit single “Rock N Roll Soul.” I wish that more newer bands would release live albums once they have a couple of studio albums under their belts. If anything, Live At Bonfest wets my appetite for more Screaming Eagles material and reminds me just how good these Northern Irish rockers really are. If you like straight up good old rock n’ roll in a live setting, you simply cannot go wrong with picking up Live At Bonfest.

Screaming Eagles‘ video with live footage and teaser of all tracks from Live At Bonfest:

Screaming Eagles new live album ‘Live At Bonfest’ – released 29.03.2018Available on all digital formats and on CD from www.screamingeagles.bigcartel.comLive …