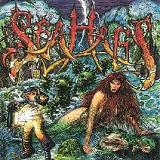 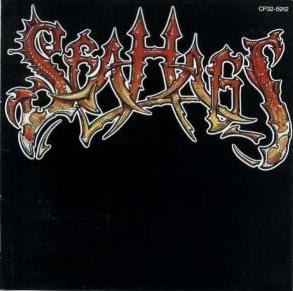 Review:
‘The new Guns N’Roses‘. That bold statement is displayed prominently in this reissue of the self-titled debut album by ill-fated band the Sea Hags. The comparisons are easy to draw, and the band does nothing to refute them, even going so far as to hire the Gunners’ engineer to produce their first record. Digging even deeper, drummer Adam Maples was rumored to replace Guns N’Roses drummer Steven Adler, although it did not materialize.

On first listen, the band does indeed sound something like Motley Crue at their druggiest, borrowing Slash‘s very best Joe Perry licks from the Appetite For Destruction record. And you know what? That’s not a bad thing. These Seattle boys (by way of San Francisco) keep it rocking from start to finish, only simmering down for the smoky instrumental “Bunkbed Creek”. Ron Yocom‘s voice drips sleaze and guitarist Frankie Wilsey slithers his way through these eleven ass-kicking tracks. Yup, the first listen revealed no problems.

Repeat listens, however, are not as kind. Well, they’re still pretty damn kind in this case, but there are a few nitpicks to be made. First off, the boys have no clue as to how to end a song. Every song fades out, and if it doesn’t it leads right into the next one. This is only a small problem, but with the exception of the aforementioned “Bunkbed Creek”, this album does not slow down. The songs can start to blend together. This leads right into the next problem: the Sea Hags has a great sound, but they can’t hold a candle to A-list sleaze bands.

Time may have changed that, but the band’s self-destructive nature caught up with them. Bassist Chris Schlosshardt overdosed on heroin in 1991, two years after this, their only album, and the story of the Sea Hags was over. Still, this record is still around for your listening pleasure. Despite a few minor faults, it should be a sleaze classic – debauchery and decadence at its finest. With time they could have evolved into an even better band, but, as their manager Chris Coyle stated, “There is only so far you can get with three junkies and one alcoholic.” Not quite the new Guns N’Roses, but the Sea Hags were fine the way they were.