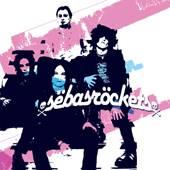 Review:
Boasting to be the “best sleaze-rock band in the land”, Australia’s Sebasrockets have recently released their self-titled debut in an attempt to back-up their lofty claim. The group does have some cool moments, but they seem unable to decide between punk and glam – and seeing as I’m not a punk fan some songs leave me cold. Oddly enough all four members share the lead vocal duties, so the listener gets a wide array of oral deliveries (some good and some bad).

Things start off on the right foot with “Downtime”, a catchy glam number with an incredible beat – it isn’t often the drum sound on a song stands out but it does here. “Rock’N’Roll Overdose” is cool sleaze song that has a subtle little guitar riff just after the chorus that adds a special quality. Even though the band is from down-under “Rocketzone” sounds like Sunset Strip material, opening with a wail that would make Georg Dolivo proud before sliding into Roxx Gang territory. “Queen Of The Nite” is straight-up glam rock, but how often do you hear a three minute glam song with a one minute guitar solo? Not very often at all, but it is a welcome change – especially considering the solos kick ass.

There are some great songs on this release, but sadly songs like “Tresspass – Outcast” and “Enemy” add too much punk oriented filler into the mix. While some people may like Sebarockets diversity I would prefer if they picked one genre and concentrated on that. I’ll just say this CD is hit and miss and let you decide for yourself at www.sebasrockets.com.