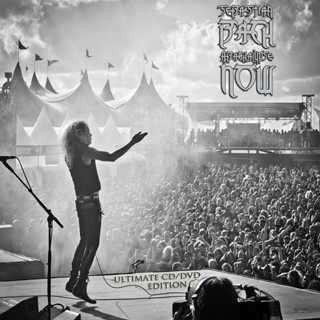 Review:
Sebastian Bach has, for most people, been considered the face of Skid Row when the band was at its commercial peak in the late ’80s and early ’90s. The live CD/DVD package ABachalypse Now is really a celebration of some of the best Skid Row tunes from their stellar first two albums, Skid Row and Slave To The Grind, mixed with a few solid Sebastian Bach solo tunes. Not surprisingly, each of the setlists has a heavy emphasis on Skid Row‘s debut CD — the Hellfest set in particular features six songs (out of 10 total tracks) from that release. All three gigs represented here rock and offer something visually different on each, although the track lists on each remain unsurprisingly very similar. The songs are heavier and some are played a lot faster (for example, “Slave To The Grind”) than what can be found on the studio CDs, which is a good thing!

The gem in the ABachalypse Now collection is likely the DVD of the set played at the Graspop Metal Meeting in Belgium. With the rain pouring down, Sebastian Bach and his band played at what the singer described as his earliest start time ever (noon) for a show. I recall a prior live release years back by Bryan Adams called Live! Live! Live! also emanating from Belgium and it was raining that night as well — Belgium is known for a lot of rain! While the rain and slippery conditions clearly limited Bach‘s ability to run around, it is still a fun show to watch and Bach and his band are forced to rely upon the strength of their songs rather than simply firing up the crowd by running around. Bach‘s band mates did not seem to mind the rain, except for Nick Sterling who was toweling off his guitar between some songs and wearing a rain jacket complete with hoodie. In good natured fun, Bach teased him about it, calling it a “metal rain jacket” or something like that. However ‘unmetal’ as Sterling may have looked that day, he delivered the goods with some solid playing and blistering solos — there seems no doubt why Bach recruited him to play in his band. Sadly, a few tracks are missing from the Graspop set, the opening track “Slave To The Grind” and show closer “Youth Gone Wild”, thus giving the DVD a somewhat odd feeling. Bach does warn at the start of the Graspop DVD that the audio has some glitches and it certainly feels that way when the former Skid Row frontman enlists the crowd’s participation and you hardly hear anything from them. Whatever the case, the Graspop DVD is a fun one even with its various glitches and song omissions.

The Hellfest set is a good one as well. The crowd looks like a huge one and the set was played during the day once again. The Hellfest set is probably the best one offered on ABachalypse Now — six songs from the Skid Row CD including classic “18 & Life”, “I Remember You”, “Big Guns” and “Youth Gone Wild”, two songs from the Slave To The Grind album and only two tracks, albeit strong ones, from Bach‘s solo years. Bach‘s French speaking is impressive and he is able to communicate with the crowd quite well including “Chantez avec moi!” (translation, “sing with me”) before the classic “I Remember You”. The Hellfest show is really just a great set from start to finish.

The Nokia show is another good one and this time with the benefit of the full light show. There are a few guest appearances and the set list is once again heavy on Skid Row‘s debut album. One thing that I have had a hard time viewing over and over is guitarist Johnny Chromatic‘s striped pants for that show — they really stand out.

After viewing the three live shows on ABachalypse Now, one thing that certainly comes across is that Sebastian Bach is one of the true great metal frontmen out there. His voice stands up quite well despite the passage of time and he seems relaxed on stage and is able to joke around (listen to his intro of Iron Maiden‘s “The Number Of The Beast” on the Graspop DVD) and communicate with the crowd with ease. He is a pro and one of the best! When viewing the DVD, I wonder what could have been had Bach stayed with Skid Row. Obviously that band has never achieved the same success since Bach left and similarly, but to a likely lesser extent, Bach has also not experienced the same type of fame. Given that most of the songs on Skid Row‘s debut CD were written by Rachel Bolan and Dave “The Snake” Sabo, clearly the missing ingredient continues to be its former frontman Sebastian Bach.

If you are a fan of the first two Skid Row releases and/or a fan of Sebastian Bach, pick up ABachalypse Now — you will not be disappointed.