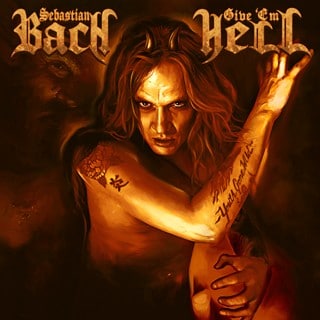 Review:
Good, but nothing spectacular — that is my assessment in a nutshell of former Skid Row frontman Sebastian Bach‘s latest album Give ‘Em Hell. Unfortunately, the hype leading up to this release does not match what is actually being offered by Bach. It is not that the songs are terrible by any means, it is simply that there is nothing that really stands out.

Bach‘s trademark voice is on display, and frankly, he sounds good on Give ‘Em Hell. Bach sings clearly, and somewhat slowly, for the most part and lets out a few signature yells throughout most songs. Apparently, this is the singer’s first record he recorded while sober, and the result seems to be a higher pitched voice than what he has sounded like in the past.

One annoying feature for half of the songs on Give ‘Em Hell is new guitarist Devin Bronson‘s, at times, horrible sounding industrial influenced guitar ‘riffs’ — if you can call it that. The terrible sounding riffs are prevalent during the first few seconds of “Taking Back Tomorrow”, “Dominator”, “Temptation” and “Hell Inside My Head”, before those tunes launch into something listenable. These riffs remind me a bit of the sound that Guns N’ Roses‘ Axl Rose unfortunately achieved with his very disappointing comeback album Chinese Democracy. A fair number of bands, including Sebastian Bach, seem to be embracing these melody lacking sounds in order to, perhaps, ‘move on’ from the well-known ’80s guitar sounds that many hair bands were known for — this is a real pity. I encourage everyone to simply tolerate, or grin and bear, the poor guitar intros during half the songs on Give ‘Em Hell since the rest of those songs are all decent.

As previously indicated, there are no real standouts on Give ‘Em Hell. If I had to pick a few songs that are better than the others I would choose “All My Friends Are Dead,” with its various tempos and “oh oh” sections that would surely work quite well live, “Gun To A Knife Fight”, which finds Bach screaming more than singing during the verses and which is based on a cool guitar riff, the slightly off beat and at times country cover of April Wine‘s “Rock N Roll Is A Vicious Game”, with what sounds like a harmonica throughout, and the catchy “Taking Back Tomorrow”, which provides lots of head banging opportunities and would again work quite well live.

If you are looking for similar sounding follow-ups to Skid Row‘s first two stellar albums, you won’t find it with Give ‘Em Hell. However, if you’re looking for a solid metal record, Give ‘Em Hell delivers the goods for the most part. I think that with a different guitarist, such as a George Lynch or Reb Beach — or simply a better sounding guitar sound — Give ‘Em Hell had the potential to be a lot better.

Reviewed by Olivier for Sleaze Roxx, May 2014