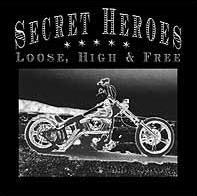 Review:
The Secret Heroes claim, “heavy metal just got a little bit dirtier.” However I’m not so sure — aside from some songs about sex, Loose, High & Free isn’t really that dirty. But it definitely is well-polished hard rock, and catchy as hell. It reminds me of a hard rock version of Canada’s AOR legend Lawrence Gowan (who currently plays with Styx).

“Eternal Nights” gets the album rolling with a chugging guitar riff and some Scorpion like vocals — an excellent way to kick of the disc. “Maybe Tomorrow” has a 70s rock feel, complete with a huge chorus. The eight plus minutes of “Steal Your Heart Away” takes the listener back to the moody and melodic heyday of heavy metal. “20th Century Survivor” has more galloping guitars while “Backdoor Hooker” is dark and moody, the dirtiest tune on the album.

It’s great to see new up and coming bands that have rediscovered the art of guitar solos, and the Secret Heroes have talent to burn. The vocals may take some getting used to, as are Gowan‘s, but Loose, High & Free is very enjoyable. I suggest hard rock fans head over to secretheroes.com and check them out.