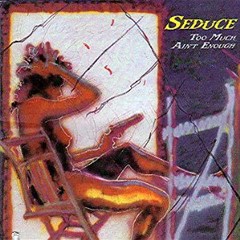 Review:
“Who is the biggest band in Detroit?… Us!”. This of course was a famous line from ‘ The Decline of Western Civilization Part II: The Metal Years’, in which Seduce was interviewed and performed both “Colleen” and “Crash Landing”.

Seduce started out as just another band in the Detroit metal scene which was exploding in the 80’s and quickly gained a large fanatical following, one that still exists today when fond memories are recalled during various reunion shows. Still, let’s pass on by the inevitable break-up, drug use and intellectual property right court cases and look at the music.

1988’s Too Much, Ain’t Enough was the follow-up to the band’s 1986’s self-titled effort and is vastly superior in terms of overall song quality. The whole album is full of that low end big bass sound which I love, and it gives the songs a real energetic feel to them.

The starter is nice little opener called “Any Time Or Place” that is quickly followed by the social commentary that is “Watchin'”. “No Use” is next but is pretty much filler until the solo cuts in, which is nice, while “Been So Long” runs along and is pretty inoffensive and a bit shallow. The title track is a fabulous number with David Black‘s guitar shredding being a real high point . The outstanding “Crash Landing” is next, it throbs along at a great pace and makes for some real head-bashing stuff! The pace slows with “Empty Arms”, but this track is simply awesome. “Accusations” is up next and is pretty much in the same vein as the rest of the album before “Slider” ends this little musical tour with a downright dirty feel to it, as expected.

What can I say, Mark Andrew‘s bass playing is okay while his vocals range anywhere from average to really good. I’m a huge David Black fan though, his guitar work throughout the CD is great. The drummer, Chuck Burns on the other hand is… shit.

Anyway… if you see Too Much, Ain’t Enough I suggest you buy it, steal it or borrow it. This is a fantastic album with nothing really bad and more than a few outstanding tracks.