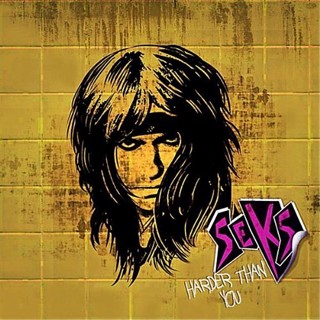 Review:
I am going to step out on a limb and say that SEKS is going to be the next big thing to come out of Norway — Oslo to be precise. I listen to tons and tons of music and I’ll tell you that this five pack of soon to be rock stars shooting up the hard rock/sleaze metal ladder not only have the look, but they have the skills to back up my hype.

SEKS was formed by vocalist/songwriter, and all around sleaze metal chairman of the board, Rock Hart — he wrote the tunes you will soon be begging for more of and then he was fortunate enough to have four uber talented 20-somethings step out of the Norwegian woodwork to help take his vision, make it theirs and bring it to fruition. Aside from the skilled musicianship of bassist Tad, drummer Savage Thrilla and guitarists Charles McMillin and Gash A Lean, Rock was also fortunate enough to befriend everyone’s favorite Euro-metal genius Julian Angel to contribute the tasty lead licks that make up Harder Than You.

The album is chock full of sing along, headbangin’, fist-pumping sleaze metal anthems that after a couple hundred spins still keep this listener entertained and going back to the well for more. SEKS incorporates a number of your, and I’m sure their, favorite bands into their sound as I pick up bits of old school metal, glam, sleaze, hard rock and be damned if a power ballad or two aren’t thrown in for good measure. Think in terms of vintage L.A. Guns, Ratt, Tigertailz, Enuff Z’Nuff, Motley Crue, Keel, TKO and then of course the new breed of Scandi rockers like Vains Of Jenna, Crashdiet, Reckless Love, etc… Album favorites as of today, and believe me they change daily and certainly all the tunes are worthy of being in regular rotation in your iPod, are “Charlemagne” (which is just a damn good sleaze metal tune), “Royal Nights” (a guitar driven rocker that invokes images of big hair and big arenas), “Get Out Now” (anthemic metal with a great rhythm riff) and “Rock Me” (a perfect hard/sleaze rock number).

If you dig music, then Harder Than You is a no brainer for you — get the disc pronto! The band is great, the tunes are great, and be damned if it isn’t our civic duty to support the youth of today so they keep churning out quality hard rock for us old farts to get all worked up about. What else is gonna get the ole blood flowing these days anyways?