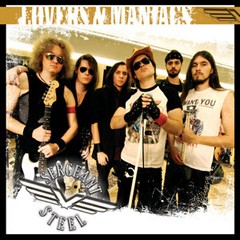 Review:
Sergeant Steel seem to be a band with an identity problem. In one breath they will show glimpses of brilliance and in the next you’ll be left wondering what the hell is going on in their heads! Not only are the songs themselves all over the place, but these Austrians jump all over genres like popcorn in a hot-air popper.

After multiple listens I still have no idea if Sergeant Steel want to be a sleazy glam band, a majestic Queen inspired outfit or something completely different! With the energetic and sleazy “Hammer Of Love” the band concoct a memorable and completely unconventional sleaze sound — the song is far from perfect yet it unexplainably works on many levels As quickly as that song grows on you the band loses focus with the horrendous “Looking For An Angel”, a track best forgotten even if it does have some cool guitar work, while the following “Still In Love” is a Queen-esque ballad that is decent for what it is. “Taking The World By Storm” starts off with a keyboard driven intro before rapid firing drum beats kick in and are followed by Rob Halford screams — the song has its moments but seems to be stuffed full of too many different ideas.

The second half of Lovers & Maniacs starts off alright with the heavy, almost traditional metal sounding, “Seizin’ The Crown” and “Love Hurtz”, which slowly builds into something half decent. Then comes “High On Life”, a song that heavily relies on the keyboards and almost succeeds with the melodic chorus, before the ballad “Miss U Tonite” (complete with harmonica work) goes nowhere. Then from left field comes “Nuts Of Steel”, a Judas Priest type anthem that includes more killer guitar work. It is a great way to conclude an otherwise strange album.

I’m honestly not sure what to say about Lovers & Maniacs, it is all over the map. It isn’t just the CD that is inconsistent though, some of the songs themselves take so many turns that can’t help but wonder what the hell just happened — it sounds more like a compilation album than a collective effort by one single band. One moment you will be subjected to growling vocals and the next high pitched wails — while the music itself is anything from heavy metal, to keyboard pomp, to glam, to oddball stuff complete with a brass section. I liked the songs “Hammer Of Love” and “Nuts Of Steel” but in between those two tracks Sergeant Steel, for the most part, lost me. The musicianship is clearly there, especially evident with the guitar duo, but what needs a lot of work is the songwriting itself. I think naming this CD ‘Identity Crisis’ would have been more fitting.