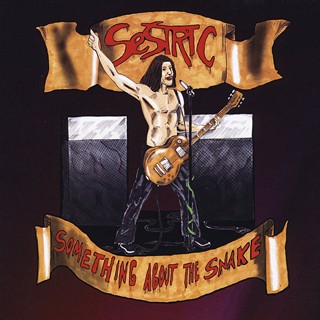 SESTRIC
SOMETHING ABOUT THE SNAKE
Released September 21, 2011 (Chris Sestric)

Review:
Raw, stripped down, and refreshing… these are words that could be used to describe L.A.’s own Chris Sestric. He is a Pennsylvania native who went for broke and moved out to the City Of Angels to peruse the dream of making it big, and came equipped with a bachelor’s degree from Berklee College Of Music.

Chris Sestric started writing songs for his solo band while in other L.A. groups. He then recorded Something About The Snake, which is a 19 song journey into the life of a struggling and upcoming musician. Most of the songs are dark and paint the gritty picture of what that life is really like. Others have a sarcastic and comedic flavor, like “If She Only Had A Brain” and “Bitch Named Internet” — the latter tells the story about how so many people have fallen in love with words they read online. I personally worked with a guy who swore up and down that he had a ‘girlfriend’ who lived on the opposite side of the country, who he had never met. They had been ‘dating’ for two years and he was faithful, and swore she was too — not to mention the Manti Te’o Story.

The flexibility of Sestric‘s skill is on display throughout the album, the boldest example of it is found in the song “Send Me To Heaven”. It’s a jazzy acoustic number that makes me want to kick back, sip a martini, and have a cigar while watching people do ‘The Charleston’. I said this album is hard rock, and it is, but there are also songs that are flat out heavy metal like “Done With Authority”, “Here I Am”, and, of course, “F.Y.M.F.” (you can figure out what those letters stand for). One of the final songs on the album, ironically called “Running Out Of Time”, is an acoustic ballad that has a classic rock feel that talks about how fast-paced life is in Hollywood — with deadlines and too many things to do in one day on your plate.

If you like Guns N’ Roses, L.A. Guns, and good hard and heavy rock with an attitude, Sestric is for you. Chris Sestric has a very unique voice which is something that sets him apart from most of the ‘mainstream’ rock/metal singers on the radio these days (who all could be the same person singing for all I know). He also has a very dynamic guitar style, so if all this sounds good to you, and you also want something original and different, pick up the CD because Sestric delivers.