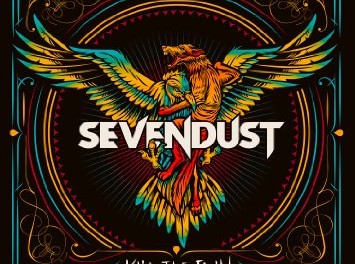 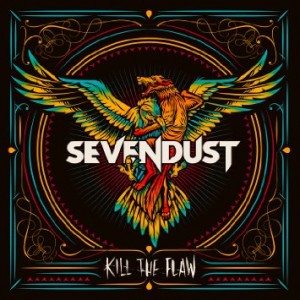 Review by Metal Headz Media:
Sevendust are at it again! Back with the new killer album, Kill The Flaw, they are ready to take over the world. It has catchy riffs, melodic vocals with the occasional screams, and hard hitting drums. I find this album to be one of their best since, my all-time favorite Sevendust album, Alpha. Kill The Flaw has the band back in top form, releasing music their fans can always expect from them. Their previous release, 2014’s Time Travelers & Bonfires, showed the band on the softer side. An all acoustic album of original songs and some remakes of songs from previous albums. Fans were wondering if this was going to “mellow” their songs, but I can assure you, that with Kill The Flaw, you do not need to worry. This is a ‘in your face, heavy album.’

Sevendust still have all of the original members from their self-titled album in 1997. Lajon Witherspoon is the lead vocalist, Clint Lowery and John Connolly share lead and rhythm guitar, Morgan Rose bangs the drums, and Vince Hornsby plays bass. Lowery did leave the band during 2004-2008, with Sonny Mayo (Snot, Ugly Kid Joe) replacing him during that time. Most Sevendust albums do feature Lowery helping Witherspoon with the melodic vocals while Rose does the belting screams. This album does lack a lot of the belting screams that we are used too on previous albums, but I also feel that this is the best drumming that Rose has ever done. Sevendust isn’t really known for guitar solos, but since Lowery has been back in the band, more and more songs do show off Lowery’s and Connolly’s guitar skills.

Kill the Flaw starts off with the track “Thank You,” and it is a great start to set the tempo of the album. Track two, “Death Dance,” has you wanting to bang your head or stomp your feet while you are walking in circles. Makes you wonder what kind of dancing the dead do. “Letters” is the only slower track on this album that just goes to show how powerful Witherspoon‘s voice is. He is one of the most underrated vocalist in hard rock/heavy metal. “Not Today,” “Kill the Flaw,” “Peace and Destruction,” and album closer “Torched,” are other outstanding tracks. They are filled with some heavy riffs, blast beats, and great rhythm. First time I heard “Chop,” I thought they were going a little country, but after 15 seconds of the catchy honky guitar, it is like a kick to the teeth with the drums and electric guitar.

I have told many people that Sevendust are one of the best live bands. If you are not a big fan of their songs or albums, go see them live and you will soon be a fan. This band loves their fans and playing live for them. Every time I have seen them, they all have the biggest smiles on their face and you can just tell they love what they are doing. They have so much energy on stage and they give you everything they’ve got. I did miss the chance to see them live when they were in town a few weeks ago, but I bet these new songs sound amazing live and fit perfectly in their set-list.

Review by Olivier:
As part of my mandate if you will as the new editor of the Sleaze Roxx site, I initially decided to open things up a little bit in terms of at least what albums would be reviewed on the site. I have admittedly rejected certain album reviews — likely to the reviewers’ dismay — from appearing on the site due to the albums in question simply being way too far off in left field from what I think the site might cover. However, there are a few groups that have passed this new more “open” threshold with Sevendust being among them. As I listen to what turns out to be that group’s eleventh studio album, I am seriously wondering whether Sevendust should have been able to cross that threshold in the first place.

I got to confess that Sevendust‘s Kill The Flaw is my first real exposure to the band. Perhaps I just have had my head in the sand for a couple of decades now but the new metal music — or nu-metal, alternative metal, whatever you want to call it — that came along with the unfortunate takeover from the grunge music era has never resonated with me. Given that my expectations were admittedly very low as I started listening to Kill The Flaw, I have to admit that Sevendust are better than I thought they would be. That being said, I can’t say that I have been converted to their new brand of metal in any way. The lack of hooks and really good melodies are a definite deterrent from having to subject myself to more than a few listens of this album. There is no question that lead vocalist Lajon Witherspoon has a good voice but I don’t find that Sevendust‘s music on Kill The Flaw really gives him much opportunity to shine and the scream-o type vocals really just kind of suck.

On a lot of the tracks, I find that the various instruments simply do not complement each other. For example, the drumming during the verses on “Forget” seems completely out of place and gives me a headache more than anything else. There are definitely portions of songs that I enjoy but for the most part, I continually look forward to the tracks on Kill The Flaw coming to an end. The only real exceptions are the songs “Death Dance” which has more stripped down guitar riffs; “Letters” which is likely the slowest, best and most melodious track on the album; and “Peace And Destruction” which has a quite enjoyable chorus and where all the instruments during the track seem to working together rather than against each other. That being said, if I compared the best track on Sevendust‘s Kill The Flaw to any track on an album such as for example Dirtbag Republic‘s self-titled debut album, I would choose hands down any track from the latter rather than the former.

It’s time to retreat to some familiar sounds and melodies. Sevendust‘s Kill The Flaw is definitely an album that I will not be revisiting in the future. I can take a song here and there but to have to listen to the entire album is much closer to painful than enjoyable.

SEVENDUST’s Official Lyric Video for “Not Today” from the album KILL THE FLAW – AVAILABLE OCTOBER 2, 2015! PRE-ORDER THE ALBUM NOW AT http://SEVENDUST.COM!iT…