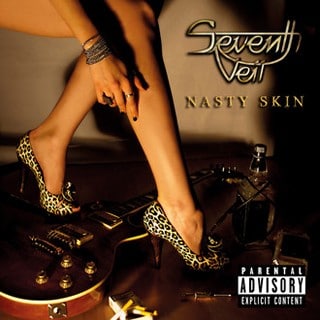 Review:
I don’t know what it is about Italian bands, but their accents are often so pronounced that it makes the vocals almost unlistenable. The same problem plagues Seventh Veil on their three-song EP Nasty Skin.

Forming in 2011, Seventh Veil got their name when singer Steven Brixx asked Motley Crue bassist Nikki Sixx what he should call his band during an autograph session at the Sunset Strip Music Festival — sadly that will probably be as close to stardom as these young rockers ever get. It’s a shame really, because the music on these three songs is pretty damn good, but I just can’t get past the vocals. The opening title track and “Rock N’ Roll Veils” both feature some impressive guitar dueling but Brixx‘s voice stumbles all over the tracks and I have no clue what he’s rambling on about. “Jack N’ Roll” is the strongest of the three — once again it features some furious guitar leads and on this one the vocals are gruff enough that the accent is quite as noticeable. I’m still clueless about what the meaning of any of these songs is however, although at one point I’m positive I hear ‘fuck your mother’!

Putting together a package with sexy artwork and using the Motley Crue connection isn’t always a recipe for success, as Nasty Skin clearly shows. Seventh Veil recently signed a contract for a full-length release but I don’t know if there is a producer out there with enough studio gadgets to clean up Brixx‘s vocal delivery. Musically I can’t fault the band at all, and with a more traditional hard rock crooner this would have been a very enjoyable listen — but in their current formation I think Seventh Veil is heading down a dead-end street.