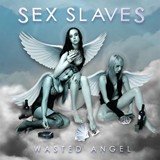 If these sleazebags could record an entire CD with the intensity of the single “Sssssay What?” they’d be the stars of the underground, but they haven’t managed to do that yet, only giving glimpses of the hell-fueled perfection they are capable of. Aside from “Sssssay What?”, “Long Live The Dead”, “Fuk 4 Luv” and “Liquor Store Romance” the Sex Slaves seem lost and confused. “Bloodlust” tries to be Wednesday 13, “Beautiful Embrace” attempts to fuse Sixx A.M. with U2, “Just A Memory” sounds like a Spinal Tap ballad without the humor and “Mexico” is their version of goth. It really does make for an uneven CD and one that is difficult to listen too. One moment you will be praising the Sex Slaves as the next coming of Christ, and in the next breath you wish someone would nail them to the cross.

This New York trio could be something incredibly special, but at this point in time they seem unsure if they want to be sleaze legends or a faceless mainstream rock band. There is so much potential here, it will be interesting to see how the Sex Slaves progress. Will they end up being the next great sleaze band or something completely forgettable? With a moniker like this, and all the dirty images it can conjure up, I’m hoping they make the proper decision. Time will tell, but at the moment the Sex Slaves are, more often than not, flaccid.