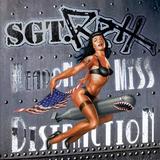 Review:
If ever a band needed a proper reissue it was Chicago’s Sgt. Roxx. Paying hundreds of dollars for the band’s rare 6 song Push And Squeeze EP is insanity and buying one of the cheap bootlegs on the market is plain stupid. Now we finally have the real thing, Weapon Of Miss Distraction, a CD that is filled to the brim with every Sgt. Roxx song you can think of – and some your probably couldn’t.

Recorded between 1990 and 1994, Sgt. Roxx is another fine example of bad timing. These guys had it all, the sound, the looks and the desire to make it big in a genre that was becoming as extinct as the dinosaur. Their sound fell somewhere between the sleaze of early Motley Crue and the glam of Poison, not exactly an original formula, but one that Sgt. Roxx played exceptionally well.

With so many songs included on Weapon Of Miss Distraction there is no denying that there will be some good and some bad. There really isn’t anything horrible here though, at worst you could say it is derivative. But you can’t deny how cool tracks like “All You Need”, the shuffling “Rockin’ Horse”, “(Don’t Do) What Your Mama Sayz”, “Don’t Cry” and the live “My Lady” (vocalist Jack Adams does his best Kevin DuBrow impression during the chorus) are. The songs that originally appeared on the EP are arguably the band’s best work, but this release shows that they were able to keep hair-metal gems flowing during an increasingly uncooperative music scene.

I always enjoyed Sgt. Roxx, and even the more mainstream Monkey Cocktail that came later, so finally having the definitive collection is great. As rare as Push And Squeeze has been, this release even includes the harder to find Bootleg Tapes. Everything is here, from the rockers to the ballads – the essential collection of Sgt. Roxx party-rock music.