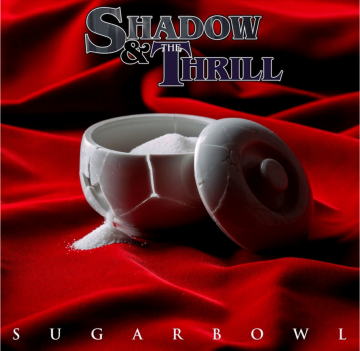 Review:
To truly appreciate this record, you have to know what you’re getting when you put it in the player. Don’t go in looking for a modern hard rock sounding album or even the trending sound from earlier this year as made clear by Dirty Shirley featuring George Lynch or Black Swan featuring Robin McAuley. Both, at times, had a very heavy sound that had clear Dio influences. This is a bluesy rock and roll album. It ventures into hard rock. It occasionally even tinkers with heavy metal. But, at its core, bluesy rock and roll would be where it fits. Do you want to know more? Read on, pal!

I saw Shadow & The Thrill open for Quiet Riot in 2018 at the now defunct BLK Live in Scottsdale, Arizona. I had zero idea who they were when they took the stage and recall listening to their set thinking, “This has a Great White kind of vibe.” Then, they did “Mista Bone” and I was looking around at the group that was at the show to see how they felt about them performing a song like that and no one seemed mad about it so I went with it also. Truthfully, their version was fantastic. And, after the song, Tony Montana talked about having written that song for Great White who he called his good friends. The rest of the set didn’t really click with me. I don’t have any idea if they played songs off Sugar Bowl that night or not. Again, they were a total and complete unknown going in to the evening but I left thinking good thoughts about their performance.

Great White is a good base for what the band sounds like. I mean, it isn’t a clone to them by any means. But, it features very heavy guitar influences with bluesy hooks and Tony‘s vocals sell the songs better than most guitarist / singers can. I mean, Tony is still Jack Russell’s Great White‘s rhythm guitarist and Brentt Acrement plays drums in Jack‘s band and Shadow & The Thrill. So, again, the lines connecting the band are very clear.

“Lovesong” is a very modern sounding track. Well, maybe modern from 2005. It has an almost punky vibe, perhaps due to the production, but is very catchy. I like the song. But, I will admit my concerns were that the album would be full of songs like that. Thankfully, that is not the case. “Misery” is the second track and it has a very heavy guitar influence and much less of a punky vibe. This one might be the song that flirts with a heavy metal vibe more than any other on the album. And, of course, I love that. “The Grind” is a much more pop blues based song. But, I find I love the song. “Mister busting my ass; Mister all you can hold” has been stuck in my head for two weeks. Good lyrics, great hooks!

The title track “Sugarbowl” is next. This is a bluesy rock track that really pushes Tony Cardenas-Montana‘s vocal range. And, he delivers. I read that Paul Stanley of KISS was releasing an R&B album. It might well be out by now. I have zero intent on buying it. But, I am willing to bet this vocal performance is what Paul Stanley wishes he could have done on his album. The vocalist does have a Paul-like quality with his delivery which is why that thought came to mind.

“Ready To Roll” is about a bus. A lot of songs might say “I’m a war machine” meaning they are able to fight if push came to shove or something like that. I am not sure if that fits here or if this song is about a bus. I like it. But, it doesn’t land as well as the first few songs, after the first one, did. “Just Enough” is the first video and single the band put out and I really dug it. Sleaze Roxx posted the video and I was happy to see this band out and about doing stuff and releasing stuff. When I saw this video, I pre-ordered the CD on Amazon. It is probably the best song all around on the album for four on the floor rock fans like me. “Crazy” is a cover. I must be honest, this one isn’t for me. I respect the musicianship. I respect the vocal performance. But, the song sounds dated. It sounds like an old blues song and I don’t mean blues rock. I’m not skipping the track when it comes on my CD. But, I am not skipping straight to that song when I pop it in either. It got a lot of rave reviews online. So, it connects with some folks… Just not this guy.

“Mississippi” feels like going to the well one too many times as the late great wrestling announcer Gorilla Monsoon might have said. Bluesy track but following it up right after the bluesy cover of “Crazy” just falls flatter than a plate full of piss for me. Simplistic song with very little backing musicianship. Minimalist song. Not for me. The album wraps up with “Unaware.” This one is more in tune with “Sugarbowl” and really connects the dots that weren’t connecting for me with “Crazy” and “Mississippi.” All the blues you can handle but with a little bit more of the power I crave. It’s a very well written song and left me wanting more songs. Sadly, it is the last one on the album.

All in all, this album is good. It isn’t going to re-invent the wheel. But, it is a good collection of songs that hit the spot as we sit at home slowly starting to examine life outside our four walls again. Tony Cardenas-Montana‘s voice was a true surprise as he has some amazing power. When he pushes himself with the harder edged tracks, he has one hell of a voice. It truly is a unique album and a great step back to songs with a purpose and quality rather than just heavy shit for the sake of banging your head. I appreciate both. And, Black Swan might go down as my favorite album of 2020. But, Sugarbowl has a good chance of being in my top five. In fact, it pretty much will unless four other albums come out that blow me away in the next three months. Somehow, with the world on hold, I don’t see that happening.