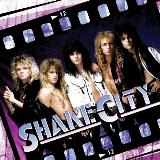 Review:
Usually when a re-issue CD of a long lost band comes across my desk I understand why the groups in question didn’t reach the ‘big-time’. The musicianship is almost always present, but too often there wasn’t enough substance to distance these bands from the thousands of others clawing their way to the top in the late 80s. Shake City is an exception to that broad generalization.

I’ll be damned if I can find a reason why Shake City (originally known as Hot Wheelz) didn’t become huge. The songs on this self-titled release sound as fresh today as they did almost twenty years ago, packing a hard rock punch with memorable hooks and choruses. Add the music to the fact that vocalist Adam Shore fronted Warrant in their formative years and that guitarist Michael Blair was Erik Turner‘s cousin and you would have expected massive success for Shake City. However the music industry is unpredictable, and a band like this that had the songs and connections just couldn’t get the break they needed.

None of that really matters though, as success shouldn’t be the benchmark for greatness. The songs and the music behind them should determine a group’s legacy, and judging by the 12 songs presented here Shake City should go down as one of the Sunset Strip’s shining stars. I’m not lying when I say there isn’t one bad song presented here. From the opening riff of “One Good Reason” to the final grunts of “Bad On Wheels”, through the rockers and the ballads, this is top-notch hair metal.

You could close your eyes, hit random on the CD player, and always find a killer cut. But for my money the best of the bunch are the Tommy Thayer (who is now making name for himself in Kiss) co-written “One Good Reason” and “Hot Love”, the heavy hitting Kik Tracee vibe of “Betty Blue”, “Submarine”, and the hard rocking “Bad On Wheels”. A cover of Warrant‘s “Game Of War” sounds like Jani Lane is on the microphone, but for the most part Shake City rocks with more balls than Warrant in their prime. That’s partly what makes Shake City so entertaining, they’ve taken the harmonies and catchy elements of someone like Warrant and added their own intensity to the mix.

Shake City isn’t just an exceptional release, but could be the soundtrack to glam metal’s glory days. Eonian Records have managed to uncover a flawless gem here. Lets hope they unearth more great treasures in the future, but until then I will be cranking the volume to this CD.