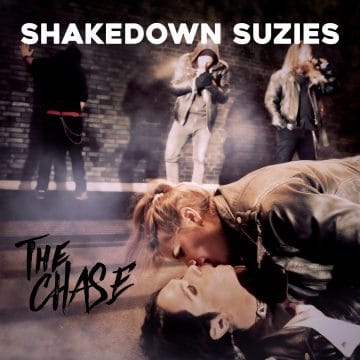 Review:
Shakedown Suzies are a band formed way back in 2009 in Jönköping, Sweden.  They hit the mark in their home country, performing as opening act for bands like Sister Sin, Bai Bang and the Babylon Bombs.  Since then, they took a few years off, and then reformed ending up with the 2017 release, The Chase.

Getting right to it, with “Get It On”, I hear a combination of Megadeth guitar riffs in the intro, and a bit of the Offspring throughout, particularly in the chorus vocal delivery. I think this might become a theme. With song two, “Not So Innocent Rozy”, I was expecting something like AC/DC‘s “Whole Lotta Rosie”, and yet its closer to Circus of Power‘s “Last Call Rosie” but not by much. It has its own power and aggression that crosses both lines. The breakdown is pretty cool. “Bad Boy Show” has an in your face intro and doesn’t let up musically. Not sure about the vocals, but the tune itself is solid. I’m intrigued by the opening bass line of “No Tomorrow” and the guitars kind of work, but really, by the time things develop, to me, it’s beneath the previous few songs in terms of quality and song writing.

“Little Miss Julie” is more punk oriented. Not bad, but nothing particularly memorable. It’s a good attempt. Again, I’m not sure “Nasty Nasty” is anything that will land on future mixed tapes. It’s good for a bite, but won’t fill you up. I love how “Get Away” kicks off. A free floating guitar riff that leads into a solid verse. And yet, that great riff betrays an overstated chorus, with over-the-top vocals. It’s like Eric Gripestam can’t decide between anger vocal crunch and/or singing normally. Finally, “Wild Nights” got my head moving from the first note.  All the musicians are on the same page and know what they want to bang out.

I would conclude that Shakedown Suzies should have produced a tighter EP as opposed to this eight song album although I am certainly not rejecting every song. Sadly, the videos below are the best examples of what the band has out there that I could find. They do not do them band credit because the videos are shaky fan cams of live shows. Then again, a sweaty beer soaked bar may be the best place to experience Shakedown Suzies.

Rock am Red, Jönköping 2017-05-19.Get our new album, The Chase, on:Spotifyhttps://open.spotify.com/album/0iYNzebo72n18FaLPh60s9iTuneshttps://itunes.apple.com…

Live at Rock am Red 2017-05-19.Get our new album, The Chase, on:Spotifyhttps://open.spotify.com/album/0iYNzebo72n18FaLPh60s9iTuneshttps://itunes.apple.com/us…