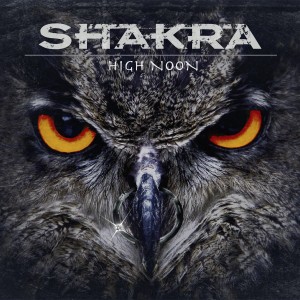 SHAKRA
HIGH NOON
To be released on February 5, 2016 (AFM Records)

Review:
Before being asked to review Shakra‘s latest album High Noon, I thought I had better listen to some of their previous material to see what I got myself into. I had never heard of this hard rock band from Switzerland, so I downloaded the album 33: The Best Of. I was pleasantly surprised that they were right up my alley.  I grew up in the eighties listening to hair bands, thrash, hard rock and continued to enjoy the evolution of hard rock and metal through the ’90s into what is out there today and these guys fit right into what I like.

This is Shakra‘s tenth album which also marks the return of vocalist Mark Fox. The guitars are handled by Thom Blunier and Thomas Muster. Bassist Dominik Pfister and drummer Roger Tanner round out this talented group of musicians.

High Noon is a great, no frills, hard rock album. “Hello” starts the album off with a great guitar intro and a catchy, almost pop rock chorus à la Def Leppard. Up next is maybe my favorite song on the album, the title track “High Noon.” It has a hard hitting intro, laid back verses, a catchy chorus and a blazing guitar solo. All of the songs have unique guitar intros which helped draw me into them. Two of my favorite intros are the sleazy guitars at the beginning of “Around the World” and the bluesy riff to start “Eye to Eye.” “Raise Your Hands” is a great anthem style song straight out of the eighties, as well as the nicely written ballad “Life’s What You Need.” Finally, no album is complete without some great, up tempo rockers like “Into Your Heart”, “The Storm” and “Wild And Hungry” the latter being another favorite of mine.

Whether you’re a long time fan or just looking for something new to listen to, High Noon has a little something for everyone.