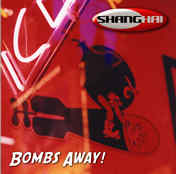 Review:
For their second release Shanghai picks up right where Take Another Bite left off, displaying some well-executed kick-ass 80’s hair metal. Songs such as “Show Me The Way”, “Devil’s Child” and “Pleasure And Pain” really rock, while there are also two nice ballads in “Love Has It’s Reasons” and “Empty Garden”. “Through These Eyes” features a duet with female AOR singer Robin Beck and a cool cover of EZO‘s “Flashback Heart Attack” is damn near worth the price of admission alone!

W.A.S.P. bassist Mike Duda helped the guys out and did all the bass parts, while House Of Lords member James Christian co-produced. The look and sound here is pure 80’s sleaze rock, nothing original, but entertaining none the less. Shanghai receives two thumbs up for Bombs Away.