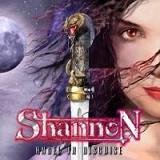 Review:
Hailing from France, Shannon offers us another lethal dose of 80s inspired music that seems to be steamrolling out of Europe. However, unlike the crop of rock from Sweden, Shannon is geared more towards majestic rock, ala House Of Lords and Europe. They aren’t gin-soaked bad-boys from the gutter of Hollywood Blvd., and this makes for a little something different.

So, how does Shannon fare against the typical Guns N’ Roses inspired onslaught? For the most part, quite well. Not to mention, a tad more impressive. The musicianship is quite good, very melodic, and never sloppy. The production is definitely squeaky clean, which works well for this material. Nearly every track has that glorious, triumphant feel to it that pomp rock is known for.

However, before I get too pumped up about Angel In Disguise, I do have to present the minuses. Nearly every track goes on a bit too long, before the vocals come in. It grows a bit tiresome, waiting for each song to truly get going. Once the track does, believe me, it rocks just fine. But I feel the listener will soon become impatient.

Another factor that grows old fast is that vocalist Olivier Del Valle insists on letting out an ear-splitting scream nearly every track, as if to announce, “We are here to rock.” His vocals are excellent, reminding me of fellow Frenchman Terry Ilous of XYZ fame. However, I feel he needs to tone it down at times, rather than insisting on keeping his singing in such a high range. I believe he has powerful lungs, I just don’t need for him to prove it each and every time.

The band also needs to find its own identity. Though they don’t sound like a blatant rip-off of any particular group, Shannon seems intent on focusing on their influences a bit too much, rather than working on their own sound. It comes off a bit too safe at times. “Look In Your Eye” and, especially, “Winter Night” are absolute barnstorming tracks, but there isn’t enough of this velocity.

Angel In Disguise somewhat misses the mark, but only slightly. A few alterations and this would have been simply amazing. I honestly don’t think the listener is going to find the same faults that I did, and instead focus on the positives. Hopefully they will, because I think Shannon could be onto something here.

Review:
Some men don’t like the French on principle. Apparently it has something to do with Salma Hayek getting it together with a Frenchman and ruining their somewhat deluded fantasies (see Shannon‘s previous review on Sleaze Roxx). But if French band Shannon is anything to go by, I can see the appeal of a French connection.

Angel In Disguise is Shannon‘s latest effort following on the heels of their 2006 EP World Of Desire which I liked. Things start off with a hiss and a roar, with a great opening for this release in the song “Do You Know”. Sometimes there is a lot to be said for a first song getting you hooked and this tune does it, so I know I’m probably going to like this disc straight away.

“No Better Times” is full of keyboard driven fun, but don’t let the word keyboards put you off – this is one of the best tracks here, full of crunchy guitars and Del Valle‘s delicious voice really shines in a ‘dirt in the gravel’ type of way. Without going through analyzing every song, “Hang On”, with a fantastic Del Valle screech beginning and ending the tune, deserves a worthy mention.

As a rule I can do without ballads and the Journey-like “On And On” is no exception to that rule. With this one I would probably hit the skip button, but fortunately (for me anyway) there is only one number in this vein. I could also give “Road Of Desire” a miss, but with 13 tracks you would be hard pushed to like every single one, and not liking two out of 13 ain’t bad. While some songs sound a bit similar to one another, that isn’t a bad thing when they are all so good, and overall most are pretty much rockers.

Shannon has been around for a while now and it shows in the tightness of the band – a professional and polished feel with great production, layered vocals and an outstanding riff-driven guitarist in Patrice Louis. Even the dreaded keyboards mix in perfectly.

If you like pure melodic hard rock, along the lines of Gotthard or Dokken, check out Shannon.