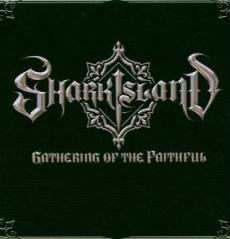 Review:
One of the Sunset Strip’s most infamous bands has returned, some 17 years after their last album! But when people think of the whole Sunset rock movement, the first thing that comes to mind is hairspray and make-up. But Shark Island predated those gimmicks, forming as the Sharks way back in 1979. Since that time they innovated, impressed, influenced (legend has it Axl Rose stole all his stage moves from Richard Black) and then disappeared.

So how does Shark Island sound after such a lengthy layoff? Excellent! But it wouldn’t be completely fair to say they have returned with their classic sound, because as many die hard Shark Island fans will notice, these songs have been circulating amongst demo traders for years and years. That’s right, the boys have released a collection of rerecorded tracks that have been lying dormant for a decade. But that isn’t so bad, as those old demos contained some of their best work and it is great to hear them polished up.

With new drummer Glen Sobel in tow, the remaining members barrel through the vaults with a nice mixture of rockers, mid-tempo songs and all out ballads. It goes without saying that I prefer the rockers, with “Heaven”, “The Stranger” and “Go West” being the stand-out tracks. In fact I’ll admit that “Go West” has always been my favorite Shark Island tune. But even the slower songs are great, I never realized how much Richard Black and Jack Russell sound alike until now and it is really noticeable on the slower numbers.

The only song here I didn’t recognize was “Down To The Ground”. If it is in fact a brand new tune, then it is safe to say that the band hasn’t missed a beat after all this time!

I know some people will be disappointed that Gathering Of The Faithful rehashes old material, but I’m not one of them. The reason I’m not upset is because these tunes are so damn good, and I’m even going to say better than Law Of The Order. With numerous songs written but still unreleased, maybe we can expect another album like this in the future – or some brand new songs. One never knows.