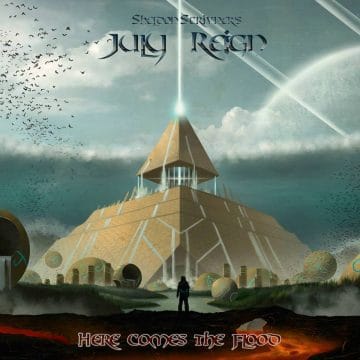 Review:
Warning. If epic shredding guitar prowess, melodic earth shattering vocals and songs etched in ‘the’ melodic hard rock are of no interest, than please move along. If all things hard rock and metal make your knickers a size or two smaller, than please read on.

As is always the case with my obsession, it is damn amazing in the year 2016 that guys like guitar god Sheldon Scrivner are creating masterful metal and in turn sharing their gift with me. Further shocked I was to discover Sheldon is a Montana, USA resident as his debut release Here Comes The Flood screams epic German power metal, which upon further review is not too surprising I suspect when prolific vocalist and native German Carsten ‘Lizard’ Schultz is at the helm of the vocalizations (look him up his resume and pedigree reads like Tim Owens). Rounding out the band is drummer Mark Duran, who as you will hear, is as powerful and talented a drummer as there ever was and he is a perfect accompaniment to the songs Scrivner has crafted.

The album flows brilliantly and as you can hear from the opener “Inferno” which is on par with Dio’s “We Rock,” the tempo is fast, rhythmic, melodic, supremely powerful and as consistent as any Primal Fear album. As I spin this platter over and over, I keep thinking that this album could easily pair up with other shred filled melodic rock albums like Masi‘s Downtown Dreamers. “When It’s Dark” is simply amazingly heavy and is as perfect a hard rock/metal song as there ever was, to name drop a couple favorites this week. The remainder of the tracks, including the instrumental “Fly” are very nice examples of what a talent Sheldon is as both a songwriter and guitar player.

So in closing, if epic euro styled power metal is your thing, than July Reign’s Here Comes The Flood should be a contender in your favorites no doubt. As mentioned and known, Carsten is a powerhouse vocalist who should appeal to fans of Owens, [Brian] Howe or [Ray] Gillen. Sheldon is in a league of distinguished gentlemen of guitar shredders and songwriters that ever was or will be — think Joe Satriani or Steve Vai, Paul Gilbert or Tony MacAlpine and lest we not leave out George Lynch, Alex Masi, et al. Again, Here Comes The Flood is as heavy and melodic a debut as any performer could hope to create. Sheldon should relish in his abilities as a guitar god in the wings and songwriting aficionado and be complacent with this epic and noteworthy tome he has crafted, but alas we should all be very very thankful as it is being said from the man himself with regards to the sophomore follow up “As proud as I am of ‘Here Comes the Flood’ (and I am, immensely), I honestly feel that the songs written/being written for the next July Reign album are even stronger…” Thank you Sheldon. We wait patiently for round two.

March 23 is the date for yet another classy debut album from MelodicRock Records. This time it’s time to get your metal on with JULY REIGN.JULY REIGN is an i…