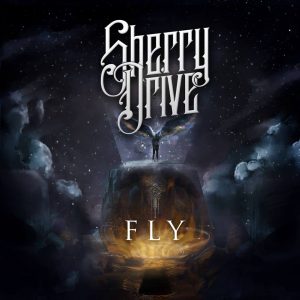 Review:
It’s pissing down rain outside after a month of heatwave. That is appropriate for featuring the cool new album by Sherry Drive. Based out of the metal hotbed of Omaha, Nebraska USA, Sherry Drive are developing a following well beyond their native surroundings.

If you can appreciate Eminem, POD, Drowning Pool, or Papa Roach, then listening to Sherry Drive is pretty good listening.  Several of their songs are hard rock, infused with rap vocals. I wouldn’t insult the band by calling what they do “nu-metal” because after talking to them, they are cool guys, and listening to them several times reveals nuances that nu-metal grossly lack. The album is quite exploratory, finding places to go that other bands would find uncomfortable. The soft “Take Me Back” is a perfect example of a gentle rock song with the above mentioned influences.

Guitarist and part time singer Anu Ratzburg told me about the variety of bands Sherry Drive draws from: ’90s grunge to rap to ’80s metal.  He tells me the band is an interesting mix of personnel, aged from early 20s to late 40s. That leads to a plethora of experiences lending themselves to the writing process.

Anu also described how the song “Blue Magic,” for example, was rapped by an outside professional, with a cool use of auto-tune and a POD feel to it.  Thing is, after the rap oriented “Blue Magic,” I get hit with “Checkmate” — very much a hard rock beater in the style of System Of A Down. “Four” slows things down for the briefest of moments…. It tries to fool you into a Pearl Jam vibe before breaking open into screaming vocals and a wild drum line.

Like most of this record, “We Are” takes me out of my comfy ’80s metal element and introduces me to Korn, System Of A Down, or Drowning Pool. Not my cup of tea, but I appreciate the guitar riffs. The opening guitars to “Android California” are spectacular — heavy, crunchy, almost Slayer like. The remainder of the song takes me different places. “Learn” is good and heavy, with everything interesting to listen to. I love the vocal arrangement. It may be sensory overload, but I’m into it. Guitarist Anu pulled off the singing on this track, and I would genuinely like to hear what else he’s capable of. Sherry Drive’s first release “This Far” is what drew me to the band in the first place. A great heavy rock tune. Listen carefully and you’ll get a feel for the whole album.

Sherry Drive are an acquired taste.  For an old ’80s metalhead like me, it’s a bit out of my comfort zone, so to speak. However, the talent is there, and it sounds very good. I think there is a segment of Sleaze Roxx readers that will very much appreciate this album and compare it to a progressive Volbeat — perhaps…. I encourage you to try it.