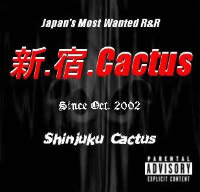 Review:
I always get a kick out of Japanese bands. You have to give them credit for their valiant attempts at the English language, but some of the grammatical errors can become comical. With that being said, Shinjuku Cactus is a band that didn’t impress me at first, but after repeated listens I am starting to enjoy it. Untitle… features three new demo tunes as well as a couple of numbers from their previous release S.A.P.

I have to admit that I enjoy their older songs better than the new ones. “Suck Me Down” and “Red Light Blvd” are pretty damn good. I especially got a kick out of the latter’s opening dialogue that reminded me of Fast Times At Ridgemont High‘s Jeff Spicoli, the female during the chorus is a nice touch as well. Out of the new songs, “Drivin’ Soul” is a super-charged rocker with a hypnotic beat. “Burrnin’ Me Away” (spelling mistake noted) is more of the same, and while vocalist KENT doesn’t always hit the right notes there is something charming about his lack of finesse. “Darkside Outlaw” sounds like a Suicidal Tendencies reject and is completely forgettable.

More than once this demo brought a smile to my face, but not always for the right reasons. Shinjuku Cactus is raw and unpolished, perhaps to a fault. But for a band that just wants to party and have a good time they get the job done. You won’t be hearing them on MTV or radio anytime soon, but for a laugh check out www.shinjukucactus.com.