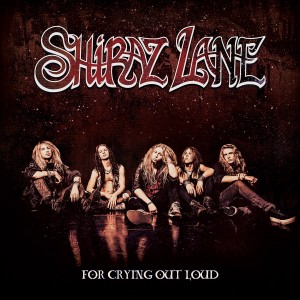 SHIRAZ LANE
FOR CRYING OUT LOUD
To be released April 15, 2016 (Frontiers Music Srl)

Review:
I admit I’ve been grumpy lately with some of my reviews. Putting sugar in my coffee makes me mean. So I stuck on the new Shiraz Lane record for the pleasurable consumption of innovative sleaze. It worked as I’m in a much happier place now.

For Crying Out Loud is the first full-length album from Shiraz Lane, following three EPs including the five song EP Be The Slave Or Be The Change released in May 2015. Sleaze Roxx reviewed Be The Slave Or Be The Change in September 2015 and stated, “…they deliver a very good EP that works perfectly both as an introduction to new listeners and to show the world what they’re all about. If this is what they can do by themselves, I can only look forward to the absolute best with Frontiers Records backing them up.”

Hot on the heels of that EP, in the autumn of 2015, Shiraz Lane did an extensive national tour of Finland supporting Santa Cruz. The hype culminated with an international record deal with Frontiers Music Srl, which was signed and sealed in September. Although music is not a matter of competition, it might be suitable to list winning the Hard Rock Rising 2014 and Wacken Metal Battle 2015 competitions as past merits. Shiraz Lane have some great buzz going for them and a few days ago, Sleaze Roxx reached out to Shiraz Lane‘s rhythm guitarist Miki Kalske to talk about the new record and some other things.

For Crying Out Loud is a fantastic representation of Finnish rock. Lead singer Hannes Kett‘s singing is a bit of a cross between high pitched Sebastian Bach and Scorpions‘ singer Klaus Meine. This album runs a bit of a gamut, from the poppy but infectious “Begging For Mercy” or “M.L.N.W.” to the dark and moody “Bleeding.” More to the sleazy side, the wicked “Wake Up” is built around a killer bass line and a strong performance from the whole band. “Mental Slavery” is another great song, sounding like both a throwback and modern at the same time. The same can be said for the album’s title track “For Crying Out Loud.”  It really highlights Kett’s impressive vocal range.

I’ve suddenly become a real fan of Shiraz Lane. For Crying Out Loud may just be in the running for my top 20 finish in the best albums of 2016, despite some great competition so far this year and it’s only the end of March!