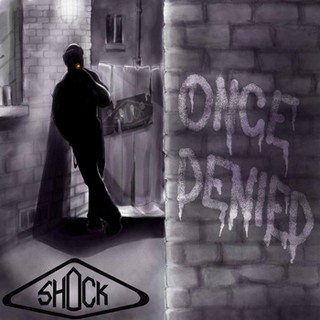 Review:
Most people are familiar with the expression “good things are worth waiting for”. That is certainly the case when listening to Canadian based power metal band Shock‘s CD Once Denied. Shock has finally released their first album after forming about 28 years ago — that could well establish some sort of record. Of note is that Shock has not been around for all those years but rather disbanded in 1990, after about five years, before reforming 21 years later in 2011. The band is now made up of original founding members, lead vocalist/guitarist Tony V, guitarist John Tennant, bassist Steve Monette (formerly a guitarist in the band) and newcomer Chad Walls on drums. Given their impressive backlog of unreleased songs from the late ’80s, Shock decided to revisit some of those compositions, rework/improve them, and finally release eight of them — the results are simply phenomenal.

There is no doubt that Shock was heavily influenced by early Metallica and Megadeth, and given that all of the songs on Once Denied were pretty much written back in the late ’80s, you are treated to power metal from the ’80s with a modern updated sound to it. With almost all of the successful ’80s metal bands — from Ratt‘s Infestation, Whitesnake‘s Good To Be Bad, Motley Crue‘s Saints Of Los Angeles, to even Metallica with Death Magnetic — looking to return to their popular sound, Shock likely offers the CD that hardcore Metallica and Megadeth fans long for, coupled with their own sound and stamp on it.

Once Denied kicks off with “Fighting Chance”, an energetic rocker which will take you back to early thrash, but also melodic metal bands such as Helloween, with its solos and melodies when it comes to some of the guitar work. While the song is a good one, it is a surprising opener for the CD given that there are many better tracks here. The next song is “Full Speed Ahead”, which is probably as close as you will get to early ’80s thrash metal on Once Denied. This track could have easily been found on Metallica‘s Kill ‘Em All opus and the title pretty much tells you how the song will be going.

“Slashing To Live” is perhaps Shock‘s best known song and what many previously considered as the band’s ‘hit single’ back in the late ’80s. The track starts off with a classic riff and takes off from there. Singer Tony V is in fine form here as you feel that he is narrating the story to you with an urgency and passion that other vocalists should take note of — he can also impressively hold a note for quite some time during the chorus. “Slashing To Live” is a great song from start to finish and the recently released animated video is pretty cool as well. “Flaming Towards Earth” starts off a little slower before kicking into some great guitar licks — it is a little different and slower than some of the other songs on Once Denied but it is still an enjoyable rocker.

From then on, Once Denied kicks into overdrive. “Driven To Kill” is a fast energetic song with some furious guitar leads, this time by John Tennant, the drums sounding almost like machine guns firing, and highlighted by the urgency of Tony V‘s vocals. “I’m Dangerous” is probably the most commercially accessible song, with “Slashing To Live”, on Once Denied — the track has an infectious beat to it from start to finish. “Paths Of Glory” is possibly the gem, and one of the heaviest songs, on the album — it also has a real ’80s thrash/power metal feel to it, which is a good thing. The CD closes off with “Splitting The Atom” which has turned into one of my favorite Shock tracks — again, the song has a definite ’80s feel to it.

What strikes me the most when listening to Once Denied is the guitar work throughout the CD — the solos are fast and furious, yet melodic and very well played. Unlike many “guitar heroes” that tend to go overboard or overplay such as Steve Vai and Yngwie Malmsteen, Tony V does not. He delivers the goods over and over throughout the album with his guitar work adding to the songs rather than overshadowing them and a lot of credit has to go to the rhythm section since Tony V‘s guitar playing would likely not have the opportunity to shine without it. In addition, Tony V‘s voice is rather unique which helps to distinguish Shock‘s songs from any other metal bands.

Was it worth waiting about 28 years for Shock to release their debut CD? I do not think any album is worth waiting that long for — take note Axl Rose. However, if you take into account that Shock has really only been in existence for seven years or so, Once Denied was definitely worth waiting for. Once Denied is the kind of CD that you can play over and over again, and still really enjoy it! Unfortunately for Shock, they will now lose their “title” as one of the “best metal bands to never release an album”. Rather, Once Denied puts Shock on par to open the discussion for which power metal or thrash metal band has the greatest debut album of all time — as it has to be up there with Metallica‘s Kill ‘Em All and Iron Maiden‘s self-titled album as best debut in the genre. I am truly hoping that Shock will have more music to offer in the future since they have more music in their ’80s era vault. If you like early Metallica, Megadeth, Iron Maiden, and amazing guitar work, Shock‘s Once Denied is likely just what you are looking for.