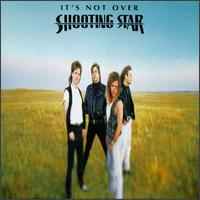 Review:
The re-vamped Shooting Star was coming off their greatest chart success with the single “Touch Me Tonight”, but it didn’t seem to help sell the follow-up album It’s Over Now. Shooting Star was attempting to cash-in on the success of 80’s hard rock with songs such as “It’s Not Over”, “Rebel With A Cause” and “Get Excited”. Of course the obligatory ballads like “We Can’t Wait Forever” and “Blame It On The Night” were also included.

The sound on It’s Not Over is very similar to Foreigner, as new vocalist Keith Mitchell is reminiscent of Lou Gramm. The musicianship and songs are very good throughout this album of well crafted AOR. Shooting Star continued to toil in obscurity for years, never receiving the recognition they deserved, but It’s Over Now remains a great album and gets two thumbs up!