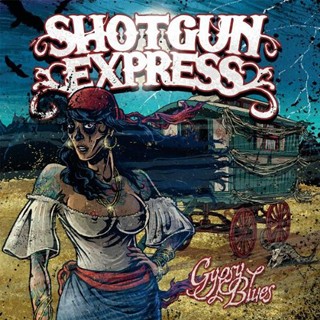 Review:
Shotgun Express is a relatively new band from Germany that was launched by former Nasty Riot frontman Diamond Flow. While Nasty Riot showed a fair amount of promise, Shotgun Express is a huge step forward in almost every conceivable way — better songs, better production values and a sleazier attitude throughout.

For some unexplainable reason I’ve always liked when bands name songs after themselves, and “Shotgun Express” is no exception as it speeds along like an out-of-control freight train with its heavy handed approach, out-of-control screams and energized guitar leads. “From The Gutter” is slightly slower and darker, but follows the same sleazy formula as the opener. Then Shotgun Express mix things up — the shuffling title track is a sinister little number (complimented by piano work courtesy of The Quireboys‘ Keith Weir) that finds Flow at times doing his best Josh Todd impersonation, “Gentleman” is the type of song that could have found its way onto Faster Pussycat‘s Wake Me When Its Over album, and “Angel Without Wings” is your typical acoustic ballad.

The second half of Gypsy Blues — or ‘Side E’ as it is referred to — begins with two killer tracks; “A Wasted Life”, which reminded me of Brother Cane‘s “Got No Shame” during the chorus, and the straight-shootin’ “Victory Or Death”. The rest of the album drifts into predictable hard rock territory — not bad, but not Earth-shattering either — before the CD closes with a convincing cover of Joe Cocker‘s “When A Man Love A Woman” — although, as these German’s prove, it’s virtually impossible to top the original.

For the most part Gypsy Blues is a very energetic and enjoyable sleaze rock romp, as the group’s hunger consistently oozes of out the songs. I’ll even give Shotgun Express bonus points for the album’s excellent guitar tone, the incredible artwork, the additional tattoos that Diamond Flow has accumulated since his Nasty Riot days, and having a band member ridiculously named Robin Robben… how can you not love THAT??