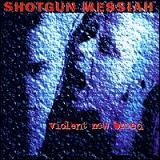 Review:
When you check out a band you’ve seen on Sleaze Roxx, you can be sure of two things; first that it’s rock and second that it’s either hard rock, sleaze rock or hair metal – anyway you call it.

Now we all know that the majority of the best bands from this genre started somewhere between the mid 80’s and early 90’s, and by the mid 90’s almost all were extinct – eradicated by the ever-changing trends in music. The ones that did survive quickly discovered the ‘in’ music tastes. Several of them decided to stick to their guns, but majority went on with a radical change of sound. Superstars like Warrant, Motley Crue and Skid Row released albums that sounded totally different than their earlier releases, trying to give their music more of a grunge feel, with little success.

Anyhow, one day last summer after visiting Sleaze Roxx I decided to check out a band called Shotgun Messiah. They caught my attention after I had seen glam shots of Marilyn Manson‘s Tim Skold sporting a full mane of hair and looking tanned like a Filipino. The first CD of theirs I laid my hands upon was a record called Violent New Breed. The album title sounded pretty cool so I decided to give it a spin, and after a few moments I was pretty surprised.

Violent New Breed doesn’t really sound like a sleaze rock release. From the opening track “I’m A Gun” to the closing “I Come In Peace” it sounds like a cleaner and faster version of Manson. The truth is that this CD is not really a sleaze rock record at all. Being aware of the 90’s grunge invasion Shotgun Messiah decided to change their sound. But instead of choosing a grunge sound, like a lot of bands at the time did, they went for… Industrial!

The band that recorded this record compromised only of Tim Skold and Harry Cody, gone were the drummer and additional bass player. More than that, there were no live drums used during the recording sessions. The drums were programmed by some guy called Ulf “Cybersank” Sandquist. Secondly, and most importantly, everything except the guitars, bass and vocals was digitally programmed. Hell, even the live instruments were beefed up using the computers.

I can tell you Violent New Breed sounds totally different that any other CD from a sleaze rock band that you have ever heard. But that doesn’t mean it’s crappy at all. The songwriting is great, the guitars sharp, and Skold‘s voice is as gritty and aggressive as it gets. One thing you can say about the guy’s voice is that it is really unique, I haven’t heard anyone who sounds like him. His yells remind me of drunk, aggressive British football hooligans, eager to pick a fight anywhere and with anyone. Skold‘s voice is the epitome of power, a big ass sledgehammer straight between the eyes (or maybe ears).

The best songs on this album, in my opinion, are the aggressive “I’m A Gun”, the equally fast and powerful “Monkey Needs”, and “I Come In Peace”. There isn’t ballad here, which isn’t really necessary, especially when you have a CD entitled Violent New Breed.

This record shows that the man behind Shotgun Messiah at this time was Skold, as it is pretty similar to Skold‘s 1996 solo record. It is a one of a kind mixture of sleaze and industrial, with a lot of computers, shouting, sharp guitars, and is very aggressive. It is a good CD if you’re looking for a soundtrack for breaking stuff.

I give Violent New Breed a solid thumb up, but hardcore sleaze rock fans may be little upset by the industrial feeling. Anyway, it’s really worth a listen.