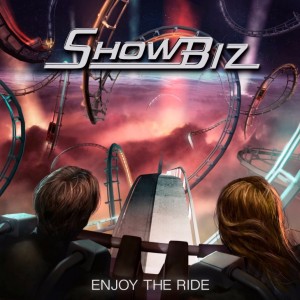 SHOWBIZ
ENJOY THE RIDE
To be released on March 23, 2016 (MelodicRock Records)

Review:
ShowBiz are a new three piece band from Spain. The group’s press release states: “ShowBiz is a band formed by Albert Maroto, ex-guitar player of Dreamaker and Dark Moor, who in the last decade has recorded several albums and toured around Spain and around the world. He’s also a die-hard fan of hard rock music in all its styles and eras, so he decided to begin writing songs of this musical style a few years ago, finishing his first ShowBiz full album Enjoy the Ride. The band is also Nacho Arriaga on drums (Arwen, Monterrey and ex Inn-trance) and Xone Aranda on bass (Time Symmetry).” Unfortunately, I can’t find many other details on ShowBiz, as that name is quite generic… the interwebs point me to a Muse album, a couple of German bands, and a set of animatronic bears from a pizza place in the US.

So let’s try and give this band some attention. Enjoy The Ride is an album that compares quite closely to Danger Danger, Firehouse or Brighton Rock. It’s the kind of pop metal that went over well in the late ’80s and early ’90s but that groups such as Guns N’ Roses and Skid Row surpassed with their more sleazed styled approach. Albert Maroto has a chance to unleash killer guitar riffs, but unfortunately some of the song compositions are pretty syrupy. “What U See is What You Get” is one song with a cool guitar structure — George Lynch style, — and is one of the better tracks. “Succubus” as well starts well, but ultimately falls apart with the poppy chorus. “Keep On Singing That Song” has a London Quireboys sound and does it pretty well. With the band’s back end in a groove, “This Time” tries for a more modern sound, again with good guitars in the verses, but the chorus is questionable. It’s almost like the band had two good ideas that they tried to stuff into one song. Fortunately, there’s only one ballad — “Find Your Way Home” — which is quite similar to any ’80s power ballad you can think of.

Now I know that this style of hair metal was popular at one time and that’s great. I liked it too back in the day. What I’m hearing on Enjoy The Ride is a real throwback to those days, without much modernization. And that’s great too. ShowBiz is pretty, gentle, and inoffensive. If that’s your style, then go for it.

Showbiz – Everybody’s got a chance

ShowBiz – What U See is What U Get

RELEASE DATE: March 23rd 2016 by the Australian Label MelodicRock Records.This is the first single and also the first track from the brand new hard rock albu…