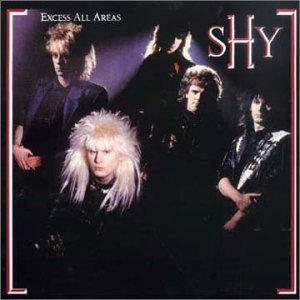 Review:
Shy‘s third release would prove to be their over-the-top commercial masterpiece. Songs like “Emergency”, “Under Fire” and “Break Down the Walls” (co-written by Don Dokken) rock, while “Just Love Me” and “When Love Is Over” slow things down. There is also a very good cover of Cliff Richard‘s “Devil Woman”.

Musically the band played highly polished keyboard-laced AOR, similar in style to bands such as TNT. Neil Kernon did an exceptional production job (if you like your albums this clean), and surprisingly was able to break Shy into the Billboard 200. The 2001 Japanese version included three bonus tracks, which is more of the same catchy rock. For their next release the band changed their name to Shy England to break into the American market, but quickly faded into obscurity instead. However Excess All Areas deserves any recognition it receives, and gets two thumbs up!