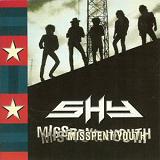 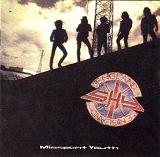 Review:
Shy‘s first album since their biggest release, Excess All Areas, tries to follow on from its predecessor’s fantastic anthemic hits, however the poor production values fails to surpass Excess All Areas.

Opening song “Give It All You Got” shows that vocalist Tony Mills can give more renowned singers a good run for their money. His voice is not too unlike Tony Harnell of Norwegian hard rock act TNT, who replaced Harnell with Mills recently.

From then on the album is a mixed bag of decent songs which could have and should have been better and other songs which seem beyond being saved. “Burnin’ Up” has an anthemic chorus not unlike Shy‘s biggest hit, “Break Down The Walls”. But I still cannot work out why the 18-second interlude “Pub” was included, it hardly bears a fitting intro for “Money”, a song with a much more ‘funk-rock’ sound than will be familiar with Shy fans.

“After The Love Is Gone” is an interesting track, ballads aren’t usually in Shy‘s remit but Mills manages to ace the vocals on this, even if the repeat harmonies on the chorus sound poor. “Never Trust A Stranger” is probably the most ‘Shy sounding’ song; strong basslines with heavy vocals. “Broken Heart” is a pretty standard rocker and “Shake The Nations” is really a poor man’s “Break Down The Walls”.

It’s unclear whether the demo for “When You Need Someone” accidentally made its way onto the album, the general sound quality is patchy and the song feels unpolished with a patchy chorus. “Love On The Line” is a near copy of Excess All Area‘s “Can’t Fight The Nights” and “Make My Day” is a refreshing song in its pure originality, compared to the rest of the album. “Encore” is a pure waste of album time.

In conclusion, Misspent Youth is more like misspent time. Shy have tried to too-closely copy the formula that made Excess All Areas such a success, however end up creating a poor-man’s version of it. Shy fans will know they are better than this, this album could have been improved if Shy had aimed to make it more original. Although the diehard fan may find that this album still holds its own.