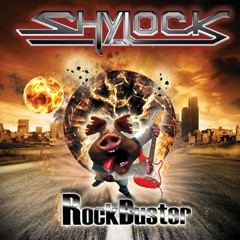 Production:
Produced, recorded and mixed by by Ondrej Hurbanic.

Review:
German melodic rockers Shylock have been around for over a decade now and their new album RockBuster catches your eye right away with a drooling guitar wielding pig. It makes for one of the strangest mascots since Riot‘s seal-man ‘Johnny’.

Kicking off RockBuster is “Damn Good”, which is a very good start indeed, and reminds me a little of forgotten ’80s band Blind Date. Things crank up a rock notch with “Dawn”, and later on with “Just for U”. When I got to the track “Rumours” I actually thought (for some inexplicable and strange reason) that Shylock had stuck the Timex Social Club on their album for a guest spot. I can only excuse instantly knowing this song because the Timex Social Club, and later the Backstreet Boys, got a lot of mainstream radio and MTV play when they originally released their versions. I hated the song then and my opinion hasn’t changed. Shylock sound pretty close to a boy-band doing this one, which unfortunately means their version sounds as horrible as it did when it was first released. Thankfully things move on and the rest of RockBuster is sprinkled with songs that work way better than this.

“Sunshine Vs. Rain” is the token sappy ballad — ballads generally aren’t my thing, but to be fair this song is what I would call ‘pretty’ with some nice lyrics and vocals. Another slower song, “Rose Of Cairo”, has a serpent snake-charmer sound to it and “Wrong Planet” is worthy of mention just for the awesome guitar work.

There is nothing unique or awe-inspiring about this Shylock offering, and at times I’m a little underwhelmed by RockBuster. The album is just pleasant enough, with a certain relaxing charm to it — which I guess isn’t a bad thing.

If you’re looking for head-banging hard rock RockBuster isn’t the disc for you as it’s definitely at the softer end of the rock scale. If you like modern day Europe and Bonfire you will probably feel at home with this one. And after all, the label for Shylock‘s RockBuster album is AOR Heaven and I suppose that says it all — a more than capable band who have put out a good, but not great, melodic AOR album.