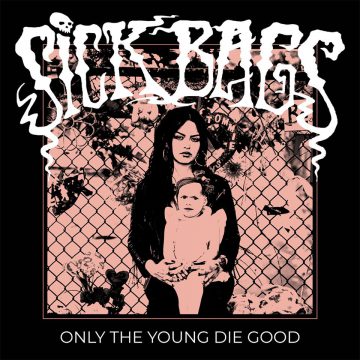 Review:
After swatting southern music with a pair of three-song releases, Richmond, Virginia rock and rollers Sick Bags have doubled up on their latest offering — a six song EP chock full of snotty street rawk more attached to bands from the grittier walkways of the Big Apple or the Motor City.  Yeah, it barely takes much more than hitting the play button to imagine guitarist Tony Leet ingesting a cocktail of the Stooges, MC5, and the New York Dolls fast enough to grab enough balls to smack Joan Jett on the ass. Not too tough to catch where the inspiration came from, but the fact it landed in Richmond, Virginia speaks more about the power of rock and roll than any possible coolness generated by the River City itself. Even the fact that the majors last name is Stoney fails to give Richmond any rock cred but thankfully, there’s Sick Bags.

Born out of the mind, heart, and fingers of Leet and punched into life by the bits and pieces of area musicians including the snarky mouth of frontwoman Mel Medina, Sick Bags is a raw, energetic blend of ’70s punk and ’80s sleaze rock kind of like if Johnny Thunders tossed his guitar in with members of The Ramones and The Stooges, then grabbed Betsy Bitch to front the band.  It’s definitely a bunch of steps below rocket science but every dirty inch rock and roll.

While rolling up somewheres between the New York Dolls and Cleveland’s own Dead Boys, it’s also not too far fetched to hear a tune like “Loser Love” or “You Gotta Go” on a playlist of post eighties sleaze rock featuring the likes of DGeneration, Backyard Babies or Hardcore Superstar. The title track hints of The Donnas or even The Runaways with more grit and edge while topped with a furiously pissed off take on a Chuck Berry solo and the rock doesn’t drop there. “Livin’ With Nothing” could easily fit on the first L.A. Guns record if that classic had been less produced and “Boys Bleed Too” is just plain out all American punk rawk an’ roll. Five straight up blasts in leaves little room for fans of raw noisy rock to bitch but that still doesn’t  keep Sick Bags from finishing things up even noisier and better on closer “Halfway To Hell”, arguably the strongest track on Only The Young Die Good. Yeah, at first it starts off like a rawer version of D-A-D‘s “Sleeping My Life Away” but for my dough, much cooler. Not only does it kick off with a smoking DGen style lead but the entire tune has all kinds of snotty guitar bits chunked all over it. Yeah, I dig that other tune this one kind of sounds like, but Sick Bags‘ track definitely has way more attitude.

Only The Young Die Good doesn’t attempt, or even wants to try, to reinvent the disc but it does give a glimmer of sticky hope on today’s overproduced, overhyped, underwhelming musical landscape. In a world filled with faux-accented vocalists and in-studio tape jobs meant to cover up a lack of talent, energy, and soul, it is a welcome kick in the pants to find that someone in the music universe still chooses to live and die by their natural ability including all the warts and bruises. Sure, it’s not a new concept in music but sometimes it just feels good to know that somewhere in the world someone is ready to plug in and turn up and remind everyone that rock and roll is supposed to be about those sticky, sweaty buttons waiting to be pushed… not the plastic ones.