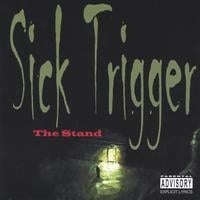 Review:
Sick Trigger‘s bio states that they employ “Alice In Chains like harmonies over progressive Zeppelin-esque melodies.” Now I wasn’t sure if that sounded entertaining or not, but The Stand has several enjoyable moments. What I enjoy most on this album is the guitar riffs that take several unexpected twists and turns throughout.

“The Stand” showcases the band’s ability to deliver some very interesting guitar leads, as it drifts from whimsical into a heavy and aggressive chorus. “One Side Down” sounds like something Phil Naro would record while “Could It Be” has an updated Warrant sound (the vocals are similar to that of Jani Lane). The second half of the disc is demo bonus tracks and definitely enters the Alice In Chains doom realm with varying degrees of success.

The Stand isn’t the type of album I would go out and purchase myself, but there are a few songs on here that are very enjoyable. Dark, gloomy and innovative guitar work makes for a worthwhile listen, the band can be found at sicktrigger.com.