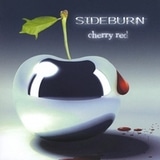 Review:
I can summarize Sideburn in one single headline; ‘Nazareth Singer Joins AC/DC’. It’s really that simple, but it hasn’t always been a winning formula. This Swiss quintet has always had the talent, but I sometimes found their music uninspired and it seemed like the band were just going through the motions. I am proud to say that with Cherry Red Sideburn have smashed that stereotype into the ground, as this is, without a doubt, the group’s finest effort to date.

Whereas some of Sideburn‘s older material was often plodding and predictable, on this CD it seems like someone has lighten a fire under their ass. The band has gathered newfound energy and excitement that translates through the music, adding a breath of fresh air to a sound that has been played to death. Sideburn don’t have the intensity of an Airbourne or Bullet, but they don’t really need it either. They are the type of bar band that plays a steady boogie beat that would make Angus Young proud and succeed with memorable and simple guitar riffs.

“Gimme The Way”, “Cherry Red”, “Ghost Of 1980” and “Wild Boy” have to rank up there as the band’s best material. All four of those songs, and many others on this album, are just straight-ahead rockers – nothing more and nothing less. Sideburn even ventures into guitar-oriented southern rock in places such as “Stand Your Ground” and to a lesser extent “Down And Dirty” (which has harmonica battling the guitars). The entire CD is based around the guitar, and the rhythm guitar work makes this album succeed in the same way it has worked for AC/DC repeatedly. Plus the guys don’t really slow things down, except maybe on “Lane”, as they just put their boots to the ground and deliver working-man’s rock ‘n’ roll.

With Cherry Red, Sideburn‘s fourth studio album, these guys have hit gold. It may have taken awhile, but now the group could easily share the stage with similar bands such as Rose Tattoo and Nazareth without looking out of place. I’m not sure what caused this slight transformation, but Cherry Red may go down as the best pub-rock album this year. In fact I guarantee that your leg will get sore from tapping your foot to this disc!